THE MDC-T is considering legal action against the police after ZRP Harare this week blocked a planned march against state corruption and maladministration. 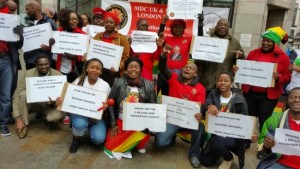 The Thursday march was meant to force government to account for proceeds from the Marange diamonds after President Robert Mugabe recently revealed that as much as $15 billion was missing.

But the officer commanding Harare Central police, Newbert Saunyama, informed the party that the march stood to disrupt â€œthe flow of traffic and people as well as peace being enjoyed currentlyâ€.

â€œWe would like to advise you that we are unable to provide enough manpower, as most of our officers are engaged in the preparation of the independence celebrations. Any inconvenience caused is sincerely regretted,â€ wrote Saunyama in a letter to the MDC-T secretary general Douglas Mwonzora.

This came after the security services Joint Operations Command last week forced the MDC-T to shift their initial date saying it clashed with Mugabeâ€™s meeting with the war veterans.

Party sources Wednesday said MDC-T was considering legal action and Mwonzora was looking into the issue.

Meanwhile, the MDC-T UK successfully held their own demonstration at the Zimbabwe House last week which they said was in solidarity with the planned Harare march.

MDC-T members gathered outside the Zimbabwe Embassy in central London and waved their placards while they sang songs denouncing the Zanu PF government.

â€˜We demand accountability from the Zimbabwe Governmentâ€ read one placard. Another one said, â€˜We demand the misappropriatedÂ $15bnâ€ and yet others said â€˜No to Mugabeâ€™s corrupt governanceâ€™.