HARARE â€”The African Union is urging Zimbabwe to repeal or amend laws that curtail the right to freedom of expression, freedom of the media and other protections. 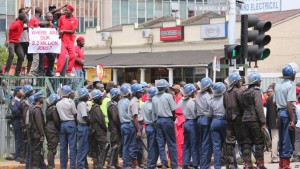 Zimbabwean police officers keep an eye on opposition party supporters as they prepare to march during a protest aimed at President Robert Mugabe in Harare, March, 14, 2016.

Speaking in Harare, AU commissioner for Human Rights Pansy Tlakula said she is happy with a constitutional court decision repealing a defamation law that opponents said was being used to stifle journalists.But in an interview as she wrapped her a four-day visit to Zimbabwe on Thursday, Tlakula said she wanted to see Zimbabwe repeal or amend more than 400 other laws that still curtail access to information, freedom of expression and freedom of the media â€” all of which are enshrined in the countryâ€™s bill of rights.

â€œThe full realization of these rights will require vigilance and ensure that the government does not only adopt laws but that those are implemented,” said Tlakula.

“And to the extent that those laws are inconsistent with the constitution,” Tlakula added, “I think it is incumbent upon Zimbabweans to ensure they have consistent engagements with authorities to ensure the repeal of those laws. If that avenue does not work, of course the courts are always an option.”

Zimbabwe adopted what Tlakula calls a “progressive constitution” in 2013. But the opposition and activists say the government is cracking down on dissent and denying them the right to demonstrate and express their point of view.

Such complaints go back years. In 2002, Zimbabwe enacted a law that makes it illegal to â€œdenigrateâ€ President Robert Mugabe. The Zimbabwe Lawyers for Human Rights says that just since August of last year, the organization has assisted nearly 200 people arrested for posts on social media sites like Facebook and Twitter.

In April, a 46-year-old Zimbabwean man was arrested after he posted photos of Mugabe on What’sApp that authorities said showed the 92-year leader as frail and â€œincapacitated.â€

After that, President Mugabe told his supporters the government was cracking down on what he called â€œabusesâ€ on the internet.