THE son of first President of independent Zimbabwe, the late Canaan Banana, has joined main stream politics and has formed a political party, Freedom Justice Coalition of Zimbabwe (FJCZ), to contest in the 2018 general elections. 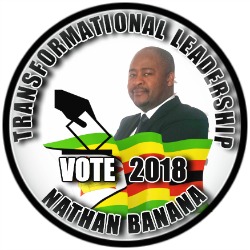 The newly formed political outfit will be officially launched at the end of June this year in Bulawayoâ€™s Luveve suburb. According to Nathan Banana (49), this comes after six years of his behind the scenes political activism.

Nathan, the third born son of the late former President Banana, is a businessman.

He has worked as a police officer and in the President’s Office. He worked in Mozambique and along the Manicaland border areas during the Mozambican civil war.

â€œSo, I have served my country at a younger age and I now feel itâ€™s time to play a different role in serving our people,â€ he told Newzimbabwe.com.

Banana said it was important for new faces to join politics as change has been sabotaged by the recycling of the same old people who have now become part Zimbabweâ€™s problems.

But what has motivated Nathan?

â€œTruth to tell, this was not an easy decision, it is actually an insane decision considering the complex nature of our socio-economic and political environment.

â€œI have been procrastinating for a very long time hoping the situation would change and there would be no need for me to make such a sacrificial pledge to leave my career and begin a whole new activity with no strategic partners to support my goals besides ordinary citizens also struggling to make a living.

â€œMy wish is to help improve the lives of my target community first and seek partnerships to help do the same across Zimbabwe.

â€œEverything looks pretty scary and impossible right now, but I have faith that this is not my own choosing, but that of a much higher power than I can comprehend,â€ said Banana.

Banana said he has political experience as he has been helping other political outfits in terms of policy creation and process mapping. He added that he has been engaging various political actors on various matters affecting Zimbabwe.

According to Banana, FJCZ party has been quietly creating structures across the country.

He added, â€œI will be contesting under that new political party FJCZ for the Luveve Constituency as a member of parliament pending confirmation of my official role in the party at their official congress next year.â€

Banana said he chose Luveve constituency for the official launch because he grew up there in the late 70’s after the Banana family returned from exile.

â€œSo many of my ex-school mates and relatives have been asking me to step forward as they believe in my ability and capabilities, and without taking away the credit that they saw in my late fatherâ€™s leadership abilities.

â€œSo, I have a kind of emotional attachment with the place from my youth years. I have, however, been asked to serve in other regions like Mutare, Harare and Umzingwane which is kumusha (home).â€