Around the year 30, in what we now call the Christian era, a small group of people made their way to the â€œoutskirts of Bethanyâ€ where they were joined by Jesus. He spoke to them for a while and then he â€œwithdrew from themâ€ and they never saw him again. Luke tells us they went back to Jerusalem â€œfull of joy.â€ 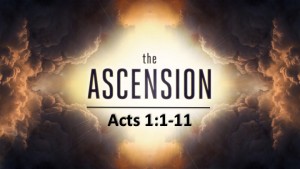 It was a day like any other for all the people of Jerusalem and for all the world, and nobody noticed what happened or thought anything of it. But the small group took their time to ponder it, savour it and wonder what it all meant. Ever since, we too have pondered this brief 30+ years in which, Christian faith tells us, God lived among us. What indeed does it mean?

One thing is clear, and that is that nothing is clear. It is quite clear how a monster of a passenger plane rises off the ground and takes hundreds of people 39,000 feet into the air for a journey of thousands of miles. I never cease to wonder at that, but I know there are perfectly good explanations as to how it is possible.

But our own rising â€“ mine and yours and everyoneâ€™s â€“ how does that happen? We have our religious answers but many people today are not satisfied with religious answers. They seem too easy; too much taken for granted. Daniel Berrigan, who died on the 30th of April at the age of 94, was a Jesuit priest, poet and peacemaker and he upset many in his generation. Tom Roberts tells us he â€œwas one of the most influential voices in shaping Catholic thinking about war and peace during the past century.â€

Berrigan gained national attention in the US during the Vietnam War, when he and eight others burned military call up papers. â€œIt was one of the most spectacular and high-profile actions of a lifetime of civil disobedience and protest against militarism, nuclear weaponry and U.S. war-makingâ€ (Roberts). How did a Jesuit priest come to perform such an act of violent non-violence? Nothing in his training would have propelled him in that direction. And yet everything in his training did.

Religion is so ambivalent. It can lead one person, in good conscience, to â€œobey the kingâ€ (1 Pet 2:13) and another, also in good conscience, to disobey him (1 Cor.4:5-6). Berrigan stirred a hornetâ€™s nest because his words and actions suggest that sons and daughters who go to war, and often give their lives, are acting immorally. Parents were furious with him. But he never judged individuals. He simply and starkly said, Americaâ€™s way of using its military might was immoral.