MARONDERA: A suspended Zanu PF Marondera Urban councillor is reported to have lost over $4 million meant for land development following his fall out with local government minister, Saviour Kasukuwere due to on-going factional fights. 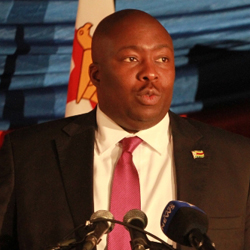 Kennedy Muraicho is the owner of Swandev, a company involved in construction and real estate, which has been ordered by Kasukuwere to stop developing a low density residential area and pave way for the construction of a high density suburb.

In 2014, Muraicho was awarded a licence by the government and the municipality to develop and turn Elmswood Farm in low density residential area.

However, council sources said the decision was reversed this year after Zanu PF realised it had no land to fulfill its September 2015 parliamentary by-election promise for Marondera Central to provide residential stands to over 5 000 home seekers.

In the run up to the by election, sources in the council say, prospective home seekers were asked to pay $511 as deposits.

However, after the by-election, won by a Zanu PF member and controversial apostolic church leader, Lawrence Katsiru, it was discovered that the council had no land to accommodate those who had paid their deposits and sought the help of Kasukuwere who advised them to repossess Elmswood from Muraicho, council sources said.

The depositors who are mostly Zanu PF sympathisers were demanding answers to what happened to their monies.

“It seems Kasukuwere found it easy to target Muraicho because of his close links to (Vice President) Mnangagwa and grab Elmswood Farm from him for redistribution to those who have paid their deposits to the council,” the council source said.

Kasukuwere, Zanu PF national commissar, is believed to be one of the ring leaders of a Zanu PF faction that is fighting to succeed President Robert Mugabe while Mnangagwa is said to be leading the other, which Muraicho allegedly supports.

However, Muraicho remains adamant that Elmswood Farm is his and has taken the municipality to court a decision that led to his suspension by Kasukuwere last week.

“You sued Marondera Municipality despite having sworn an oath of loyalty to the council. The grounds for your suspension are that you have acted in a manner prejudicial to your being a councillor in that you have put yourself forward as the owner of Elmswood when you are not, in fact, the owner and in direct conflict to the Municipality of Marondera. You will be brought before a competent authority to answer allegations above in due course,” Kasukuwere wrote to Muraicho last week.

But Muraicho is adamant that Elmswood Farm is his and has vowed to fight both the council and Kasukuwere.

“The company (Swandev) wholly and legally owns Elmswood Farm, the land I believe is at the centre of my suspension. With all due respect to the powers that be, I will rather stand by my word, or rather the company’s stance that it legally owns the said piece of land,” Muraicho said.