CHIPINGE: MDC-T youth chairperson for Manicaland province, Itai Masaka, has warned Zanu PF against violence saying members of his party were not going to fold their hands while they were being terrorised by Zanu PF as political violence rears its ugly head again. 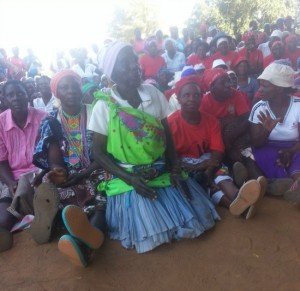 Age aint nothing … An elderly woman made it to the rally

Masaka said the recent MDC-T march in Harare was successful because it was backed by members of the CIO, army and police.

â€œCIO, police and army are ours. When we marched in Harare they backed us behind the scenes. Some even congratulated us because they are also tired of this repressive system,â€ said Masaka amid a thunderous applause from villagers.

â€œWhen we got into the government of national unity, life changed for everyone including those in the army, police and CIO. When Zanu PF stole the 2013 general election, these people no longer have a fixed pay date. They want to move with us but letâ€™s show them direction as a party.â€

Masaka made these remarks while addressing a well-attended rally at Mwacheta area in Ward 16 in Chibuwe, Chipinge West on Saturday.

Clad in MDC-T regalia, elderly villagers braved the afternoon heat to attend the rally as the party gears up for the 2018 elections.

Masaka said gone were the days when party supporters could do nothing when they were being terrorised by Zanu PF supporters, which he said had a history of violence.

â€œThis time around your vote will not be stolen. We cannot have a situation where people choose their leaders but the same leaders are denied power by some individuals. We will defend you as our parents,â€ said Masaka who is also former Mutare deputy mayor.

â€œWe are not going to give you another cheek to slap us again. We have developed thick skin over the years.â€

He continued: â€œVillage heads be warned not to be used by Zanu PF to coerce people to vote for Mugabe. Please donâ€™t intimidate people because this time around we will not be intimidated.â€

He said Zanu PF should stop pushing children to recite a national pledge and instead focus on bread and butter issues such as improving the economy and creating the 2, 2 million jobs they promised just before the 2013 elections.

â€œThey want to divert our attention with these petty issues,â€ said Masaka.

â€œEven their own (Acie, Zanu PF youth activist) Lumumba said it openly that there is rampant corruption in Zanu PF.

â€œZanu PF is drowning and disunity is now the order of the day. Where is Munacho Mutezo now? We heard he is now with People First?â€

The MDC-T politician said even the Zanu PF youths were duped into believing that they were going to be allocated land after the 2013 elections and yet, up to this date, they are still landless.

â€œThey are still landless. Zanu PF is a party which does not fulfil its election promises. They are even refusing to re-align the new constitution.

â€œWhere are the Provincial Councils we voted for during the referendum? We will continue to march demanding full implementation of the new constitution,â€ said Masaka, who also urged villagers to ensure they were all registered for elections in order to dislodge Mugabe and Zanu PF.

Speaking during the same occasion, MDC -T Ward 16 chairperson, Maphius Chijoka, said the party leadership should play an active role in ensuring that the peopleâ€™s vote was not stolen.

â€œThe party leadership should protect our vote. We cannot continue to vote them when they cannot claim power. They should just stand up and fight for what is theirs,â€ said Chijoka.