MUTARE: Government could withdraw licences issued to commercial broadcasters who have so far failed to go on air, a cabinet minister has said. 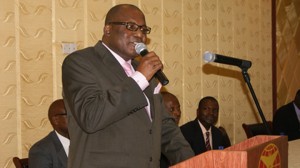 Information minister, Chris Mushohwe, made the threat during the official launch of Zimpapers owned Diamond FM in the Manicaland capital Friday.

â€œAs government we are warning those holding on to their licences for speculative purposes that they (permits) will be taken back. We want to see them being operationalized,â€ said Mushohwe.

Government issued eight commercial broadcasting licencesÂ to locals but to date some have yet to become operational raising suspicion that they had no capacity to run such projects. The licenced stations include YA FM in Zvishavane, Skyz Metro Bulawayo, Breeze FM Victoria Falls, Gogogoi FM Masvingo, Faya FM Gweru and Diamond FM Mutare.

Mushohwe said he was impressed by YA FM which he said was benefiting the community they operate in.

The minister claimed that as the economy improves government was going to give more licences to those interested in broadcasting business.

â€œThere are many people who are saying we should have granted them licences and they would have been operational today if we had done so. But as we get more frequencies we will give out more licences,â€ said Mushohwe.

The minister said recently he was approached by the European Union ambassador to Zimbabwe who said he was interested in seeing government giving out licences to community radio stations.

Mushohwe pleaded with the media to report positively about Zimbabwe, saying some â€œscreamingâ€ headlines were scaring away potential investors.

â€œMedia should report objectively about the country. They should take into recognition that if they report negatively about political events in the country they are scaring away investors. They are also forcing those already in the country to take flight because they will feel their investment is not secured and guaranteed,â€ said Mushohwe.

He said by doing so, journalists will be shooting themselves in the foot as the media industry will not be spared in the on-going economic meltdown.

â€œCompanies will close and there will be no market for media products. No one will have capacity to buy newspapers and broadcasting services because the market will shrink,â€ said Mushohwe.