PROMINENT lawyer, Beatrice Mtetwa, says it was good that the once powerful former State Security Minister, Didymus Mutasa, was ousted from government as his continued occupation of the office would have affected the law suit which was filed against him for authorising the abduction of Jestina Mukoko in 2008. 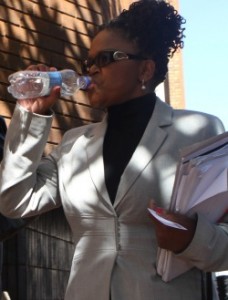 Mutasa ouster good the case against him … Lawyer, Beatrice Mtetwa

The Zimbabwe Lawyers for Human Rights board chairperson was speaking at the launch of fellow activist Mukokoâ€™s book in Harare Thursday.

Mutasa was, 18 months ago, sacked from both Zanu PF and government by President Robert Mugabe on allegations of siding with the ousted Vice President Joice Mujuru. Mugabe accused Mujuru of plotting to assassinate him.

Prior to his ouster, Mutasa was in charge of the intelligence ministry whose officers have been linked to the torture and murder of Mugabeâ€™s critics since 1980.

In December 2008 and allegedly under Mutasaâ€™s instructions, members of the Central Intelligence Organisation (CIO), abducted Mukoko from her Norton home, tortured and kept her incommunicado for almost a month.

Mukokoâ€™s abductors later handed her over to the police who (police) then charged her with committing banditry with the intention of over throwing Mugabeâ€™s administration.

The Zimbabwe Peace Project director was remanded in custody and stayed at Maximum Security prison for another 68 days before being acquitted.

Her ordeal is narrated in her book titled, â€œAbduction and Trial of Jestina Mukoko – The Fight for Human Rights in Zimbabwe.â€

At the launch of the book, Mtetwa said the dismissal of Mutasa was a blessing in disguise.

â€œNow that we are going for the civil trialÂ and itâ€™s been stalled for quite a bit and I think itâ€™s good that it was stalled becauseÂ  he (Mutasa) no longer has power, we haveÂ  a queue of people offering themselves as witnessesÂ  to say what else this person did,â€ she said.

Mukokoâ€™s lawyers had initially filed an application with the High court seeking for an order to compel the Zimbabwe Republic Police to divulge names of individuals who had handed their client to them.

The then State Security MinisterÂ  challengedÂ Mukokoâ€™s application through an affidavit in which he saidÂ it was not in the best interest of national security for the police to disclose who had abducted Jestina because it was going to jeopardise the methods the state security use.

â€œThankfully he (Mutasa) was booted out, and basically what he was saying (in the affidavit) was that my guys adducted her (Mukoko,â€ said Mtetwa.

The lawyers then used that affidavit to file a civil law suit against Mutasa and the case is pending.