THE opportunity for â€œpeaceful changeâ€ in Zimbabwe was missed in 2002 when South Africa resisted the urge to take action against Harare, a senior US diplomat has said. 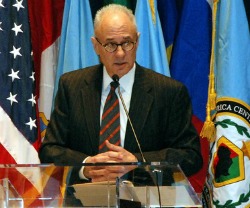 William M. Bellamy said a number of African and western states would have wanted South Africa to act against Harare for the sake of change only for Pretoria to sabotage everything by resisting pressure.

â€œThe real international failure in Zimbabwe is more recent howeverâ€¦. By 2002 it was clear that a majority of Zimbabweans wanted change, had voted for it, had risked their lives for it. And the change they called for was in all respects congruent with the liberal democratic values we hold dear,â€ said Bellamy.

He added, â€œA number of African states, including some of Zimbabweâ€™s neighbors, sympathized strongly with this sentiment. The US, the UK, the EU, Commonwealth members also called for more pressure on Mugabe to respect the rule of law and acknowledge the will of the electorate.

â€œI remember this well as I was a senior US official and part of this lobbying effort.â€

Bellamy, who was speaking during a discussion on David Coltartâ€™s newly published book on Zimbabwe in the US, said South Africaâ€™s unwillingness to buy into the opinion of other nations was all that Mugabe needed to prolong his oppressive rule.

â€œSouth Africa was not prepared to go along. It preferred a tactic of quiet diplomacy. This gave Mugabe the protection he needed to continue business as usual. The opportunity to press for peaceful change was missed in 2002, and it was missed repeatedly thereafter as Western powers continued to urge action on Zimbabwe and South Africa resisted.

â€œThere is no doubt whatsoever that at several junctures after 2002, the right South African moves could have galvanized international support to end the violent stalemate in Zimbabwe. It was never that difficult.

â€œA free and fair election under strict international supervision was all that was needed. Zimbabweâ€™s tragedy is that it never happened. As long as South Africa shielded Zimbabwe from outside pressure, rather than orchestrating such pressure, Mugabe had the lifeline needed.â€

Interestingly, Bellamy also admitted in the same speech that the US government (including himself) also played their part in the Zimbabwean crisis by ignoring the 1980s killings of the Ndebele speaking people in what some now see as genocide.

Thabo Mbeki who was SA president during the time Bellamy is referring to still insists that Pretoriaâ€™s policy towards Zimbabwe was correct.