A SENIOR intelligence officer, Zenzo Ntuliki, is set to contest parliamentary elections in Gwanda North in the 2018 elections, Newzimbabwe.com has heard. 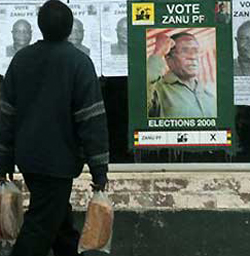 Ntuliki, the Matabeleland South Central Intelligence Organisation (CIO) boss, has reportedly started campaigning in Gwanda North where he is bankrolling a series of soccer tournaments in an effort to lure youths.

He may have to battle it out with incumbent Zanu PF legislator, businessman Madodana Sibanda, in the primary elections.

â€œHe (Ntuliki) has been moving around campaigning and has been hosting football galas and at one time slaughtered a beast where villagers were called to feast,â€ said Ntokozo Moyo, a villager at Stanmore.

Last year, Ntuliki was involved in a protracted legal battle with an Esigodini farmer, Timothy Sean White, over the control of Avalon Farm.

Initially, Ntuliki was allocated the farm by the lands ministry and won a court ruling after Gwanda magistrate, Reuben Mukavhi, ordered White to vacate the farm forthwith.

However, through his lawyer, White appealed the decision and was granted the order for stay of execution by Justice Maxwell Takuva but Ntuliki proceeded with the eviction order.

Last July, Justice Martin Makonese then ordered Ntuliki to vacate the farm within 48 hours and pave way for White.

Ntuliki is a former Zanla cadre, having trained in Tanzania during the liberation struggle. He was to join the CIO after independence, where he rose to become one of the senior investigating officers in the economics department in Harare. That was after he worked in Matebeleland together with the late Menard Muzariri during the 1980s. He is a business man running bottle stores in Gwanda and Gweru as well as a hotel in Bulawayo.