YOUTHS from various organizations this week protested against the Zanu PF youth leagueâ€™s one million-men march slated for Africa Day in Harare. 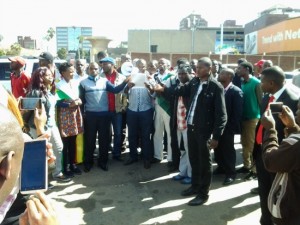 Zanu PF has already sourced $600 000 to finance the event which is meant to honour President Robert Mugabe, independent Zimbabweâ€™s only leader since 1980.

Opposition parties have since condemned the march, saying it is a sheer waste of scarce national resources. They have also suggested that the platform be used to denounce the veteran leader for failing to fulfil his 2013 election campaign promise of 2.2 million jobs.

Leading the demonstration conducted under the banner #Tajamuka, was political rights activist, Promise Mkwananzi, who challenged all the youths to join â€œusâ€ in denouncing the planned one million-men march.

â€œYou cannot use the Africa Day to march for an individual, and on top of that using the meagre resources the country has towards a senseless and meaningless march,â€ he shouted.

He addedâ€™ â€œWe urge you to abandon the idiotic march and direct all your efforts towards restoring sanity in this country.

â€œOur economy is bleeding, hospitals have no drugs, quality of education is deteriorating yet you still have time and energy to organise a march that has totally nothing to do with improving the situation in the country.â€

The youths vowed to stage a series of protests, saying Zanu PF and Mugabe were taking the country for granted.

â€œThe streets are going to be our second home until Mugabe steps away from the throne and paves way for the implementation Â of the reforms encapsulated in the new constitution,â€ said Mkwananzi.

â€œMugabe must step down now because he no longer has the ability to superintend over the affairs of our country. We cannot wait for 2018, the country is bleeding and we have decided to do finish the unfinished business of the liberation struggle,â€ he shouted.