â€œWE know what has gone wrong â€¦ and we have the solutions,â€ former Vice President Joice Mujuru told thousands of supporters of her Zimbabwe People First (ZPF) party at rally held in Harare on Saturday. 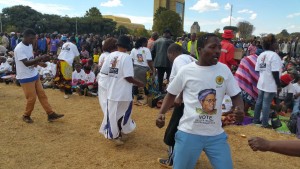 She told the 92-year-old President Robert Mugabe to stay at home and solve the crippled countryâ€™s many problems.

â€œSurely, foreign trip need to be reduced to focus on fixing the countryâ€™s economic woes,â€ said the former vice president.

â€œPlease stay at home and work for the people.â€

Government has this month delayed to July payment of salaries for teachers and nurses but President Mugabe is hardly ever at home, constantly travelling abroad at the slightest excuse.

According to the opposition, the foreign trips which include unexplained jaunts to Singapore, have cost the cash-strapped government more than $80m so far this year.

The conference centre was the venue for Mujuruâ€™s eventual ouster from the ruling Zanu PF party in December 2014 which followed months of relentless attacks by Mugabe and his wife, Grace.

â€œWe were called names and some of the things that I cannot even repeat in front of you,â€ Mujuru told her supporters Saturday.

Curiously, despite the serious allegations, which included treason, the government has not taken Mujuru to court for trial.

â€œWe were accused of various allegations, but up to now I am yet to be arrested,â€ she said.

â€œI pass through a lot of police road blocks on my way to the farm but I have never been told to turn and go to the police station. â€œ

She continued: â€œToday I stand before you to tell you the truth at the same place (where I was accused).

â€œAll that was said about me were lies. Some of the people who said these lies have now come out in open and confessed that they were used; no lie will live forever.â€

Mujuru was fired from government with several ministers and other top Zanu PF leaders thought to have backed her alleged coup bid against Mugabe.

On Saturday, she said they fell out with the veteran leader after telling him the party had lost focus and indicating they wanted a change of course.

â€œOur former colleagues were not willing to put people first,â€ she explained.

â€œWe asked why we were diverting from the slogan â€˜Iwe Neni Tine Basaâ€™, and when we questioned that we were perceived to be moderate, pro-western and pushing pro-western policies.â€

The ZimPF leader said her party has restored hope and faith to Zimbabweans.

â€œThis party has attracted people from a broad political spectrum including those who were apolitical â€¦ people who had lost hope in the political activities and leadership of the country,â€ she said.

â€œWith former members of the ruling party we know what has gone wrong and, once we get into power, will take the country out of its current situation.

â€œZimbabwe must move forward; we are the future and we have the solutions.â€