This week, former Australian Prime Minister Tony Abbott was photographed in suburban Sydney campaigning to retain his seat in the national election to be held on Saturday. Despite his status, there were no armed security guards, no expensive motorcars â€” just one man meeting people in the street. This is the kind of maturity in democracy to which Zimbabwe must aspire. 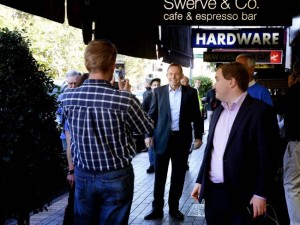 Zimbabweâ€™s independence was won in a bloody war that finally brought the Smith regime to the negotiating table.

Yet, when we look around our country today, do we see a free people? Do we see a new and better Zimbabwe? Did our fathers fight in vain?

Brute force and military might have never made a better society. At best they can repel oppressors and guarantee security. Our fathers threw off the yoke of colonial oppressors and won for us the opportunity to live in freedom and to apply our intellects and efforts to build for ourselves a sustainable democracy where justice prevails and our people are able to live full and satisfying lives.

In the new and better Zimbabwe, we as a people have the right to choose our own government and to determine our own future. We have a system of justice in which the humblest citizen should be equal before the law with the Head of State who should feel free to walk the streets of Harare without deafening sirens and armoured vehicles.

The people of Zimbabwe have been betrayed by the ZANU PF government. They have had enough. They are no longer afraid. They are speaking out. It is time to give form and direction to this groundswell of public opinion.

Now is the time to come together and to work together. We must unselfishly apply our wisdom and our wit in an unstinting effort to build the Zimbabwe that we want.

We have inherited the parliamentary system from the British and it serves people well in nations where it operates properly. Zimbabwe needs to adapt the parliament in a truly African way if it is to serve our country to the best advantage.

For example, there is no need for the parliament to be an adversarial forum where government is pitted against opposition. Southern Africa has the venerable tradition of the indaba where issues are thrashed out until a consensus is reached and then all unite to support that consensus. This will not hinder robust debate but it will require resolution and humility once a majority decision has been made.

Political parties would continue to contest elections to win the privilege of representing their constituents but, in order to get the benefit of the best talent available, Ministers would be chosen from various parties. Politicians do not have to be adversaries – they can collaborate to achieve a common purpose. This is the kind of political maturity that is lacking in Zimbabwean politics. This is what we need.

These are some of the ideas that ZUNDE will be taking to CODE and NERA, as well as to the major opposition parties, as we seek to build a credible, united alternative government.

In the end, our politicians have to put national interest ahead of self-interest and work together for the common good. Then Zimbabwe will have attained a truly mature democracy.