The People's Democratic Party (PDP) would like to express its solidarity with the citizens of Zimbabwe who have spontaneously decided to take matters into their own hands to end their misery under the Zanu-PF tyranny. 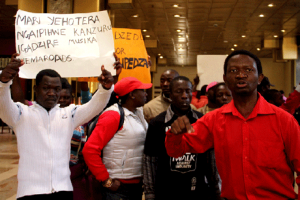 We support as a party any efforts by the suffering masses of Zimbabwe to put an end to the state sponsored destitution, starvation, joblessness, hopelessness and the impoverishment of our people by a vampiric rogue regime that survives on pillaging and plundering the national resources.

We note with dismay the failure by the Robert Mugabe regime to revive the economy, to create job opportunities for the people, to provide basic services, to deal with the liquidity crunch, to pay civil servants and to deal with the spiraling levels of corruption in government which has bled the national fiscus of potential revenue earnings totalling over US$15 billion worth of Chiadzwa diamonds which cannot be accounted for.

We also note with a heavy heart the deteriorating standards of living, the diminishing economic opportunities, the heartlessness of the state in plugging off all survival overtures by citizens through the criminalisation of importation of commodities from neighbouring countries for resale in the country.

We also note with great trepidation the worsening levels of lawlessness among the law enforcement agents who extort money from motorists through bribes as well as the progressive crumbling of the national infrastructure which resembles that of a war torn country under the stewardship of an embattled government that has failed to attract direct foreign investment into the country to revive the industrialisation drive so as to achieve positive national economic growth prospects.

It is our belief that Zimbabwe cannot be cured from its ailments by the same culprits who are responsible for the acts of sorcery that have been perpetrated against the people by a parasitic Zanu-PF government in the past 36 years.