A withering drought on top of a faltering economy and a financial crisis have not weakened the hold that Zimbabwean President Robert Mugabe and his Zimbabwe African National Union-Patriotic Front (ZANU-PF) have on power in the country. In fact, the 92-year-old Mugabe is already looking ahead to the nation’s 2018 elections. It seems that only his death, or a revolt from within his party, will end his more than three decades in office.

Zimbabwe’s economy went from bad to worse in 2016 and has given little sign that it will improve. Lowered demand for minerals, a crucial export, has caused revenue from mining royalties to fall 45 percent below its first-quarter target. In addition, a severe regionwide drought has wreaked havoc on the agricultural sector, threatening the food security of millions of Zimbabweans. The country’s production of tobacco, another top export, is expected to drop by more than 15 percent this year.

Falling exports along with a negative foreign investment climate, deflation and a drop in industrial production have worsened the country’s cash crisis, as U.S. dollars (the de facto currency) are in short supply. As a result, the government has struggled to pay its civil servants, who make up a significant portion of the formal economy. It has even meant a troubling two-week delay in military salaries. In a bid to address the liquidity crisis, the government has taken the extreme measure of imposing restrictions on the importation of certain basic goods in an attempt to prevent further dollar outflow.

Despite those problems, Zimbabwe’s government is in no imminent danger of collapse. If anything, ZANU-PF â€” in power since the nation’s independence from the United Kingdom in 1980 â€” is as strong as ever.Â The party enjoys broad legitimacy because of its legacy as the first victorious party after independence. Its newer challengers simply do not stack up. From its start, ZANU-PF asserted itself as the de facto state party. Because practically all government officials were party members, the state and ZANU-PF were soon synonymous. The party pressed its advantage, setting up an extensive patronage system to maintain a firm grip on society, ensure the loyalty of the military and security apparatus, and exert control over key economic sectors. In addition, Mugabe’s talent for winning over political opponents â€” such as Joshua Nkomo’s Zimbabwe African People’s Union, a rival liberation party and partner during the war for independence â€” before destroying them at a politically opportune time has ensured the party’s continued dominance. 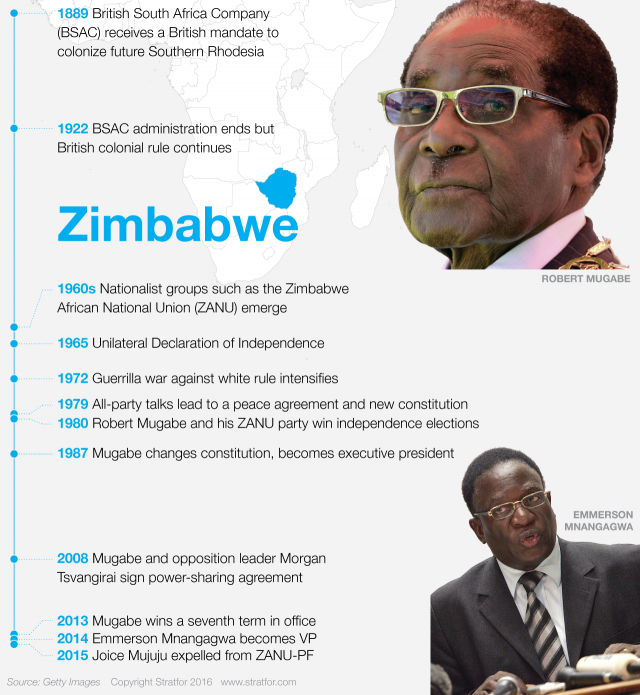 The profound resilience of Mugabe and the ZANU-PF system he expertlyÂ manages has allowed this status quo to survive the country’s near-total economic collapse in the late 2000s, when hyperinflation reached an annual rate of more than 79 billion percent and its currency became essentially worthless. Of his political survival through that and other crises, Mugabe said, “I have died many times â€” that’s where I have beaten Christ. Christ died once and resurrected once.”

Uncertainty for the Party

But given Mugabe’s advanced age, the party will soon face its biggest challenge: replacing its only standard-bearer. His successor will face crucial economic and political questions as the direction of the rigid ZANU-PF state becomes less clear in a post-Mugabe era. Political jockeying in the run-up to the country’s 2018 elections may distract its political leaders from undertaking needed reforms to help attract outside investment, prolonging the country’s financial ills.

Mugabe’s intention appears to be to run the country until his death. His political acumen has not dimmed with the years, nor has his ruthless exercise of power â€” when he feels it is needed. In addition, he has the added legacy as Zimbabwe’s undisputed independence leader, having led his forces to victory against the white minority government of Rhodesia, and as its only national leader. His continued reign will likely hinder any significant attempts at systemic economic reform, given his desire to maintain the status quo.

Potential successors have risen and fallen over the years. Emmerson Mnangagwa, who managed important portfolios before ascending to the vice presidency in 2014, is a primary candidate.Â Nevertheless, Mnangagwa’s continued ascension is far from guaranteed, and other challengers are maneuvering. In recent years, Mugabe’s wife, Grace, has taken on a more visible role in ZANU-PF, further clouding the succession picture. The uncertainty has provided Mugabe with an additional pretext to remain in office; one thing theÂ competing factions in the party continue to rally around is Mugabe’s patronage and political prowess.

Mugabe will be forced to relinquish political power one day â€” either under pressure from party factions or by his death â€” meaning that the succession battle is looming. The circumstances of the succession will be important. If Mugabe were to reverse course and allow for a successor to rise, then he would help solidify this new leader’s power base. The more likely scenario, though, is that Mugabe will die in office and a power struggle will ensue, leaving the next president to navigate the system of political control Mugabe has built without his insights.

Opposition parties such as Movement for Democratic Change and Zimbabwe People First will remain impotent. Morgan Tsvangirai, the leader of the Movement for Democratic ChangeÂ and a perennial opposition candidate, recently announced that he had been diagnosed with colon cancer. Zimbabwe People First’sÂ leader, Joice Mujuru, was once a ZANU-PF heavyweight and contender for the presidency until she had a falling out with the leadership and was expelled from the party in April 2015, effectively ending her political career. Mujuru’s fall from grace has enhanced the perception that political fortunes can be made only in ZANU-PF. Even if a candidate outside ZANU-PF could win a presidential election, there is no guarantee that the party-controlled state would allow the victor to take power.

Picking up the Torch

In light of the feeble political opposition and the control that ZANU-PF has over key economic sectors and security forces, a post-Mugabe election would assuredly bring a ZANU-PF figure to power. Despite any initial rifts created during the jockeying for leadership, ZANU-PF will present a more or less united front once a successor is crowned. From that point, though, that new leader will face critical questions, such as how he or she might manage the expansive system of patronage that Mugabe has wielded for decades.

The chances of stability in a post-Mugabe political order will increase if the future president has extensive party and security experience. Familiarity with the system in place will enable him or her to more quickly understand the rules of the political game and avoid angering powerful party members with perceived slights or cuts to the benefits they once enjoyed. Moreover, with firm backing from state security services, a successor will be able to clamp down on dissent.

Another important factor will be the state of the economy at the time of the transition. Mugabe’s political strength and cunning was enough to prevent near-total economic collapse from shortening his rule. Yet the next leader might not be blessed with such skills, meaning that economic crises could be more politically destabilizing than during the Mugabe era. The potential threat may compel a successor to push for painful economic reforms to broaden the base of the economy and ensure the availability of state patronage. Moreover, the new leader may be faced with two potential foreign policy directions: closer relations to China or an opening up to the West.

After decades of warm relations with China, Zimbabwe’s dependence on the growing Asian powerhouse grew in the 2000s as the Mugabe government’s economic policies and autocratic system further isolated his country from the West. In recent years, the two countries have signed landmark finance deals across multiple sectors. Moreover, China has invested hundreds of millions of dollars to modernize the country’s underperforming mining and agricultural sectors, in addition to spending nearly $100 million to build and fund Zimbabwe’s National Defence College outside Harare.

In a particularly notable investment in Zimbabwe’s diamond industry, after mining giant De Beers pulled out of the country in 2006, a new mining company called Anjin Investments â€” a joint venture between China’s Anhui Foreign Economic Construction Group and a Zimbabwean entity called Matt Bronze â€” was created. The company’s board included ZANU-PF leaders, national police officials and military officers, possibly adding a Chinese element to the patronage system. A move by Mugabe in March to kick several mining companies, including Anjin Investments, out of the country’s largest diamond field may have been a ploy to more fully restore his control over the patronage system. His desire to further his interests is to be expected, and the dynamic will change when his tenure ends.

Zimbabwe’s relationship with China could be a powerful tool for a party such as ZANU-PF if it feels that it must resist calls from the West to liberalize the political system to maintain its rule. It could also prove tempting to a figure such as Mnangagwa, who may feel compelled to violently crack down on resistance if factions in ZANU-PF and pressures from broader Zimbabwean society challenge his rule. His visibility in Beijing in recent years may mean that Chinese leaders are comfortable with him. Although they would not demonstrate overt support for his candidacy, they would be an alternative if the West refuses to significantly engage, ensuring that the financial tap will continue flowing for Zimbabwe. Moreover, the next leader’s effectiveness may be enhanced if he knows how to navigate Chinese networks and how to increase Chinese investment.

Regardless of who succeeds Mugabe, Zimbabwe’s next president will inherit a political system that has been defined for decades by his deft manipulation of party patronage and sharp political skills. The decisions the successor takes will define the country’s path forward in the post-Mugabe era.