Members of the riot police on 3 August 2016 assaulted freelance journalists Lawrence Chimunhu, Christopher Mahove and Tendai Musiya as they covered demonstrations against the Zimbabwe governmentâ€™s plans to introduce bond notes in the wake of the deteriorating socio-economic environment. 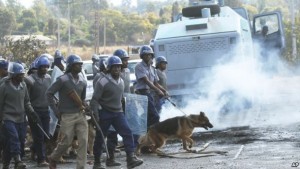 ChimunhuÂ  sustained bruises on his right elbow following the assault by the police. The police reportedly continued assaulting the journalists despite being shown accreditation cards issued by the Zimbabwe Media Commission.

The safety and security of journalists is now at great risk in Zimbabwe as evidenced by the increasing number of cases involving the assault of journalists while conducting their lawful professionalÂ  duties.

MISA-Zimbabwe notes with great concern that the assault of the three journalists comes barely a week after the assault of Mugove Tafirenyika, a journalist with the Daily News, by Zanu PF supporters while covering a meeting at the partyâ€™s headquarters in Harare.

It is indeed worrying that the police as custodians of the law should themselves be on the forefront of these wanton unlawful assaults ofÂ  journalists whose work and right to cover and report events as they unfold is protected by the Constitution.

MISA-Zimbabwe reiterates its calls for these cases to be thoroughly investigated and bring the perpetrators to book.