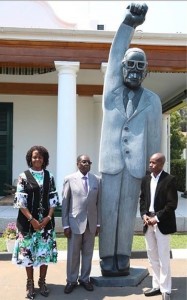 President Robert MugabeÂ has unveiled a 3.8-metre statue of himself at the same time as ZimbabweÂ suffers its worst economic crisis in years.

TheÂ cartoon-like statueÂ depicts the 92-year-oldÂ in defiant attitude, with one arm raised above his head and fist clenched, wearing his trademark thick-framed glasses.

It was produced over six months by Dominic Benhura, a local sculptor whose work has been exhibited around the world.

Mr Benhura was pictured standing nervously beside the statute along withÂ Mr Mugabe and his wife, Grace.

Mr Mugabe said the work had been donated as â€œcharityâ€.

â€œToÂ see oneself reproduced this way, itâ€™s something that should be more appreciated than just by saying ‘thank you’,â€ he was quoted by the state Herald newspaper as saying during the unveiling ceremony. â€œI will say in an African way and in our own way, personally, thank you in a deeper way because it has gone deep in my heart.â€

Mr Benhura said he had spent six months producing the likeness of Mr MugabeÂ after being commissioned by the presidency.

â€œI wanted to make it as big as possible,â€ he said. â€œThis is our number one so I wanted to giveÂ it a strong impression.â€

But his work was ridiculed by Zimbabweans on social media, who characterised it as: â€œSuperman in the style of The Simpsons”.

Others suggested that Mr Benhura had committed “career suicide”. “The poor chap is probably at Chikurubi prison by now,” another wrote, referring toÂ Zimbabweâ€™s best-known jail.

The unveiling came after Patrick Chinamasa, theÂ ZimbabweanÂ finance minister,Â completed a tour of Europe in a bid to secureÂ agreement for an International Monetary Fund bail-out. The government has also announced a plan to axe 25,000 public sector jobs.

The dire economic conditions have prompted a rare strike byÂ teachers, doctors and nursesÂ and even more rare protests against Mr Mugabeâ€™s regime by a coalition of opposition parties which police have put down brutally.

Mr Mugabe warned on Friday that his â€œpatienceâ€ with such indiscipline had limits and hinted at a ban onÂ social media sites like Facebook and Twitter that are thought to have helped bring together protesters.

â€œ”Let these opposition parties and all those groups be warned that our patience has limits and will definitely soon run out,â€ he said. “If we take actions which are painful they have only themselves to blame.”