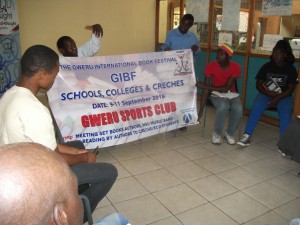 Musonza discussed his and the organisation’s initiative with this journalist and mentioned that after decades of association with creative writing, all indicators now point to a brighter future for budding local writers. The workshops are held every Tuesday at Gweru Memorial Library courtesy of American Corner.

â€œThe GIBF members are extremely happy to officially launch the workshop despite some start up hiccups. The launch marks the beginning of a new era. The ‘Authorsâ€™ Workshop’ is a project set up to prepare and refine the authors of tomorrow. This dream goes back to 2013 and am very happy to say that the dream has finally come to fruition,â€ said Musonza.

Musonza, himself a renowned and published author as well as anthologised poet acknowledged both at home and abroad, aims to train both seasoned and upcoming writers.

The GIBF organised workshops were established in a bid to identify, nurture and polish new talent by one of the Provinceâ€˜s veteran published authors.

Participants are drawn from Gweru suburbs and it is expected, with time, to include authors from other districts of the province as well. The workshops will target novelists, short story writers, poets and others and will provide interaction with other artists and stakeholders.

Scores of up and coming authors, playwright, and poets who spoke to this journalist hailed this initiative saying that it afforded Gweru authors the opportunity to network among themselves.

â€˜â€™This is a very noble initiative and I think its major objective is to afford seasoned and upcoming artists a platform to shine like stars and to take the centre stage. Formal training and organised discussion was lacking before, now there is a platform for them to share and network,â€ said Arts Spring Entertainment official, Mabhandi.

Artists also appealed to Education Us department official, Kudakwashe Nhanga to help to promote budding authors by providing the same Internet and communication technology as is available in other big cities. This would be as part of the National Internet Governance Resolution number two, known as ‘Access and Affordability for All’.

Playwright and actor, Austin Mabhanzi had this to say: â€œI am optimistic, the youth in Gweru have now realised that a living can be made through creative writing and the publishing ofÂ Â  e-books. However, the majority of potential writers don’t know where to start. There is a need for extensive training in this regardâ€.

Brian Nyanhi said that the workshops will lead to the further development of the arts in the province: â€œThe overwhelming support we have received form American Corner, since the inception has seen the GIBF go from strength to strength,â€™â€™ he said.