Mai Mujuru insisted that she was not responsible for Operation Murambatsvina, Gukurahundi, the introduction of Bearer Checks and Violence committed by ZANU PF when she was a Deputy to Mr. Mugabe. However, Mai Mujuru apologized for the atrocities which she said she didn't commit. If she was not responsible for the atrocities committed during her leadership, there may be no need for her to apologize. 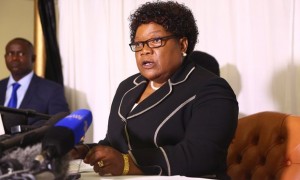 Why is Mai Mujuru pushing for the compensation of only one farmer out of the hundreds of farmers chased by her former party ZANU PF? Mai Mujuru is strongly convinced that she is going to be the transitional president in Zimbabwe soon after Mugabe leadership. The proposed compensation of Mr. Whatson-Smith is designed for Mai Mujuru or ZANU PF to get support from the west and MDC supporters. Mai Mujuru should think beyond the compensation of one farmer. MDCs should treat Mai Mujuru with caution because she is surrounded by ZANU PF CIOs like Mutasa, Gumbo, Basikiti and Mavhaire.

Mai Mujuru made another blunder on Gukurahundi, she argued that Solomon Mujuru was not involved in Gukurahundi because he was in Pakistan when the atrocities started. She said Solomon Mujuru was only called back to Zimbabwe (possibly by Mugabe) to restore order. Which order did Solomon Mujuru restore? Imagine 20,000 innocent civilians (including the father of Jonathan Moyo died) and Mai Mujuru is giving credit to Solomon for the restoration of order during the Gukurahundi. Restoration of order in Mai Mujuru’s perspective means the deaths of only 20,000 people.

Mai Mujuru and Jonathan Moyo are the same, we should not allow the cabinet minister (Moyo) to exhumeÂ Â  his father and accord him a decent burial. We all know that 20,000 people were killed by Mugabe in Matabeleland and giving a decent burial to the father of Jonathan Moyo is not going to reconcile all the Ndebele people. The compensation of Whatson-Smith by Mai Mujuru is not a solution to the land problem in Zimbabwe. We should look beyond individuals.

Mai Mujuru is a coward and I urge Zimbabweans to treat her with caution and we need to prove beyond doubt that she is not a Mugabe project. She declared thatÂ  Gukurahundi, Operation Murambatsvina, Introduction of Bearer Checks and violence committed by ZANU PF prior to 2008 was carried out when she was in Pakistan for a holiday. She only accepted responsibility of good education system in Zimbabwe.

I am calling upon Zimbabwean to condemn the proposed reburial of Jonathan Moyo’s father. The same privilege should be extended to all victims in Matabeleland and Jonathan Moyo should stand for the whole region. The same applies to Mai Mujuru, we should all condemn the proposed compensation of one white commercial farmer. All victims of ZANU PF land reform program should be considered. Let’s give Mai Mujuru another chance to cleans herself, she did not impress when answering our questions when she was in London.

Don Chigumba is a political activist based in South Africa