In a move aimed at addressing voter apathy among Zimbabwean youths, the Zimbabwe Yadzoka/ Mayibuye iZimbabwe campaign has launched the â€œZvimakire Zama, VHOTA Campaignâ€ which is aimed at encouraging youths around the country to register to vote ahead of the 2018 elections. 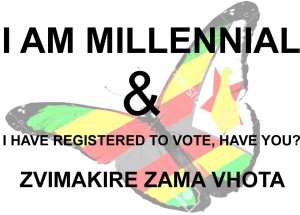 Zimbabwe Yadzoka/Mayibuye iZimbabwe leader, Victor Chimhutu said the campaign is targeting millennials from across the country.

â€œWe decided to launch this campaign against the backdrop that the millennials are under registered as voters hence we are trying to stimulate this very important demographic group. We need them to know that their fate is in their hands hence the name Zvimakire Zama.

He said they would also make extensive use of social media to reach out to as many youths as possible while fliers and placards will also be used to reach out to rural youths.

â€œStrategies that we are using to attract this group of voters include, but not limited to posting videos on social media and these videos will be portraying just how important it is for the youths to register to vote,â€ said Chimhutu.

He added that they were concerned over the continued manipulation of jobless youths by power hungry politicians hence the â€œneed to motivate the young population to vote for a better futureâ€.

Zimbabwean youths have been among the major perpetrators of political violence, and according to Chimhutu, the youths need to be educated that elections are all about creating a better future â€œrather than being used to shed bloodâ€.

The Zimbabwe Yadzoka/Mayibuye iZimbabwe was launched in August this year and aims at educating and mobilizing the rural electorate on the need to vote for democratic change in Zimbabwe.

On another note, the Zimbabwe Yadzoka/Mayibuye iZimbabwe campaign was launched in Masvingo yesterday.

Masvingo Provincial Coordinator, Wellington Chakona said they had managed to mobilize different political parties in the province towards the creation of a better Zimbabwe.

â€œWe have managed to work with different opposition parties and that shows a high degree of tolerance. We are also encouraging youths to register to vote and the response has been quite encouraging. So far, we are working in areas that include Bikita, Zaka Central, Mkwasine and Chiredzi.