MDC-T leader Morgan Tsvangirai will take his campaign to dislodge Zanu (PF) in the watershed 2018 elections to Midlands where the former Prime Minister will address a mega rally at Mkoba Stadium in Gweru on June 10. In an interview, MDC-T's Midlands South spokesperson Munyaradzi Mutandavari confirmed the development. 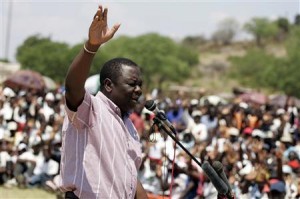 It will be the first time this year that Tsvangirai will be making a public appearance in the country’s third largest city. The last time the former Prime Minister appeared in public in Gweru was in August last year- the appearance was historic. At that time the MDC-T leader jointly participated in an anti-Mugabe protest together with now National People’s Party president Joice Mujuru.

The widow of the first post-independence army general was fired from Zanu (PF) in December 2014 and on that day he denounced she joined Tsvangirai in denouncing Mugabe’s rule and his mismanagement of the economy.
“It is all systems out and I can confirm that our party president His Excellence Mr Morgan Richard Tsvangirai will be joining thousands of our supporters at Mkoba Stadium on June 10 in Gweru. Its going to be a big event because our supporters want to have first hand information concerning several issues such as the planned grand coalition, the party’s stance on the economy, National Electoral Reform Agenda (Nera) and the details about the last stretch towards formation of a new government,” Mutandavari said.
The rally will come at a time when Tsvangirai and his former top lieutenant Tendai Biti seem be to be inching closer to working together again while modalities for a grand coalition that will see all opposition parties fielding a single candidate to challenge ageing President Robert Mugabe in the 2018 crunch polls are at an advanced stage.
Speaking on the sidelines of a mini-rally at Mtapa hall in Gweru recently, Alderman Kenneth Sithole, the Gweru district MDC-T chairperson told The Zimbabwean that the June 10 rally will be oversubscribed.
“We have already started holding mini-rallies in all the wards the city to announce the coming of president Tsvangirai on June 10. At these mini rallies the attendance has been overwhelming. The people are eager to meet with their president and hear the plans of change that are being put together. In that regard we expect to see Mkoba stadium being packed to full on that Saturday. The people generally are tired of Mugabe’s rule and so they are keen to listen to the leader of the next government. So the suffering that is happening to people will simply self-motivate them to attend the rally,” he said.
Sithole added that the rally will be of great importance as it will come in the wake of the MDC-T’s national standing committee meeting and another gathering of the party’s national executive council which are scheduled for this week.
“We urge all the people of Gweru and the Midlands at large to come and attend the mega rally. It is going to be a mega one and all those who want to give testimony to the winds of change should come to the stadium on that day. We have also organised road-shows to run this week and so the rally will be something very big,” said the former Gweru councillor.
Obert Gutu, the MDC-T’s spokesperson said leaders of other political parties have promised to attend the rally in solidarity. These include PDP leader Tendai Biti, Joice Mujuru of the National People’s party and Welshman Ncube, the MDC president.

In 2018, the MDC-T has said it will be the end for Zanu PF and Tsvangirai will form the next Government after the elections.