Heal Zimbabwe condemns in the strongest terms the assault of students from the University of Zimbabwe’s College of Health Sciences by college security details on 26 June 2017. The assault came after hundreds of students staged a peaceful demonstration against fees hike. 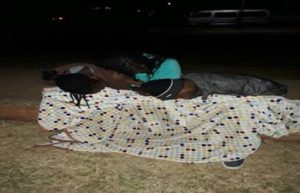 Some of the students sleeping outside after the eviction.

As the college security details fought running battles with the students, #ThisFlagPastor, Evan Mawarire who had also joined the students in a show of solidarity was arrested by the police. Soon after the protest, College authorities issued an eviction order forcing the students to leave their halls of residence accusing them of having participated in the demonstration. Most students had to sleep in the cold outside the halls of residence.

Heal Zimbabwe notes that crushing peaceful demonstrations using brute force is not only barbaric but unconstitutional. Freedom to petition and demonstrate is a constitutional right that is provided for under Section 59 of the Constitution where every person has a right to petition or demonstrate peacefully. Resorting to unlawful evictions of students is not only a sign of desperation by the University but unconstitutional. Heal Zimbabwe implores the College authorities to find amenable solutions to students’ concerns instead of using brute force and unlawful evictions as a way of punishing students.

The organisation also calls upon the University authorities to rethink the fees hike as it is an insult to poverty stricken Zimbabweans who are struggling to make ends meet under the current harsh economic conditions. The police must also not use arbitrary arrests as a means to crush demonstrations but should understand that it is the students’ right to express themselves peacefully. HZT also calls for the unconditional release of Pastor Mawarire.