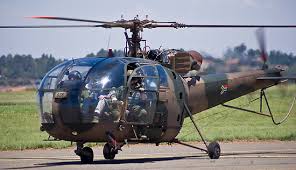 At 9.30 in the morning an Air Force helicopter flew low overhead, its green and brown camouflage stark against the bright blue winter sky. We didn’t need the clattering of the helicopter to remind us that this was rally day, the day the President was coming to town. For a week before the Presidential visit the town had been filled with dust and the roaring of road repair vehicles. Our local town council had embarked on the great deception, creating the illusion that everything was fine, clean and well maintained in our dirty, run down, pot-holed town. A veritable army of maintenance workers appeared from nowhere and were suddenly, frantically, clearing verges, picking up litter and even fixing blocked, overflowing sewage pipes. The question on everyone’s lips was: where have they been all this time while the town fell to rack to ruin.

With the newly laid tar still wet on the ground, rally day had arrived. Only a handful of the main feeder roads in the town had been repaired and verges cleaned but that obviously didn’t matter: out of sight was obviously out of mind. Along the main highway leading to the newly scraped patch of open ground where the rally was to be held, plastic bunting had been stuck to lamp posts and a banner hung across the main road with a picture of President Mugabe proclaiming: “Presidential Youth Outreach,” and “Vote Zanu PF.”

Everywhere the wealth of the visiting dignitaries was on display: open topped sports cars, double cab SUV’s, tinted windows, a sparkling white Humvee with Mr Mugabe’s name on the back window; his and hers luxury vehicles parked side by side near the Zanu PF office, one with a huge picture of Mrs Mugabe, the other with Mr Mugabe’s image.

From early morning trucks, buses and lorries started streaming into the town. It was frightening to see hugely overloaded, open-topped thirty tonne trucks crammed with two hundred or more people standing, hanging onto bulging sides, squashed in like sardines in a tin. School buses from near and far came, packed with teenagers having a day off, away from classrooms and lessons, a chance to catch up with friends. Police stood at every intersection along the route being taken by the Presidential delegation; women wearing wraps and headscarves decorated with Mr Mugabe’s face stood in groups on the roadsides while young men in their teens and early twenties headed to the dusty open ground where our 93 year old President was to address them.
President Mugabe finally addressed the rally late in the afternoon and the sun was rapidly heading to the horizon. Many sitting there on that dusty patch of open ground were too young to have ever known any leader other than Mr Mugabe, the oldest President in the world and in power in Zimbabwe for 37 years. Others were too young to even remember the land invasions and farm seizures in the early 2000’s; the policy which started Zimbabwe’s spiral into economic decline. Instead of talking about decaying infrastructure, collapsed industry, massive unemployment or banks without money, Mr Mugabe yet again turned the negative spotlight on white Zimbabwean farmers.
>
> ”We have discovered that in Mashonaland East province alone…, there are 73 white commercial farmers who are still occupying some farms when our people do not have land,” Mr Mugabe said, “We are going to take those farms and re-distribute them to our youths.”
>
> That evening as the dust settled and temperatures dropped, thousands of people were crammed back into perilously overloaded thirty tonne trucks to travel through the night back to where they’d been collected from.
In the last caramel glow of dusk an eagle owl landed on a nearby telephone pole and scanned the ground for movement, for signs of life to prey upon. A feeling of sadness settled over the dusk; sadness that now, inevitably, yet another round of farm invasions, evictions, lost jobs, homes and production would begin again, sanctioned by our 93 year old President the day he came to Marondera town.
Until next time, thanks for reading, love cathy