Recent press reports in certain sections of the media have sought to portray an image of discord, disharmony and disunity amongst the top leadership of the MDC. 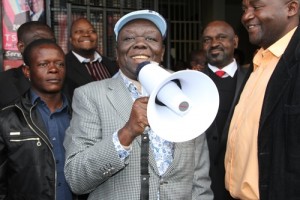 In particular, it has been wrongly and maliciously reported that there is a plot to oust President Tsvangirai. Nothing could be further from the truth. The fact of the matter is that the MDC is a united political party under the able and visionary leadership of President Morgan Tsvangirai. In fact, all genuine MDC cadres, from the branch level up to the national standing committee, know that Morgan Tsvangirai is our undisputed leader. Any insinuation to the contrary can only be the work of our detractors working in conjunction with the discredited CIO within the faction – ridden and collapsing Zanu PF regime.

We would like to make it abundantly clear that Vice President Thokozani Khupe is not working with Dr. Joice Mujuru, or with anyone for that matter, to oust President Morgan Tsvangirai as the leader of our mighty party.

Vice President Thokozani Khupe has been working with Dr.Joice Mujuru, together with other female politicians in Zimbabwe from various opposition political parties, at the Women Electoral Convergence (Wec), which is a multi – party forum composed of female politicians who are mobilizing women to vote in the make or break 2018 harmonized elections. Indeed, President Morgan Tsvangirai is actually very supportive of the activities of Wec and he has encouraged female leaders within the MDC to take an active part in mobilizing the female vote.

We are acutely aware of the fact that our political enemies and some other such political malcontents are not happy to see a strong and united MDC.As such, these political charlatans will do whatever it takes to cause confusion, alarm and despondency within the ranks of our powerful and mighty political party. We would like to place it on public record that President Morgan Tsvangirai is a powerful and magnetic political brand. His visionary leadership of the MDC has enabled our party to emerge as arguably the largest and most popular political party in Zimbabwe. The MDC is the real deal, the only game in town.

We would like to warn our political detractors that President Morgan Tsvangirai is marching to victory in next year’s Presidential elections no matter what evil machinations these misguided political missiles might want to plan. Democratic change is coming to Zimbabwe very soon and Morgan Tsvangirai will be there to take up his seat as the country’s First Citizen after the 2018 harmonized elections.