Just imagine if so many people were to register and vote in next year’s election that it became impossible for ZANU PF to rig the result and they were swept from office to be replaced by a truly democratic government. It is not going to happen. 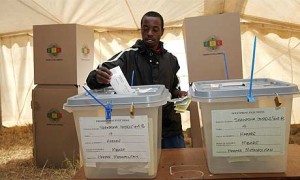 How can an election be free and fair when one of the contending parties controls the electoral process? It is quite ominous that the cause of a problem can be regarded as part of the solution and it is naive to believe that ZANU PF will allow free and fair elections in 2018.

It has already become clear that biometric voter registration cannot be securely implemented in the time remaining before next year’s election —and another election using the existing voters roll is simply not on!

The security of the BVR process is fatally compromised and the integrity of next year’s elections is already in question because of the proposed role of Israeli company Nikuv International Project to manage, store and compile voter data ahead of the 2018 elections.

It is laughable that Laxton Group’s BVR system should be used only to collect voter data and not to securely store that data which, surely, is an integral part of the process. Having BVR kits without a supporting back end is like having a water pump without any clue where you are pumping the water to.

Nzira-Indlela: a roadmap to free and fair elections

ZUNDE unwaveringly supports free and fair elections as the only solid foundation for the democratic process and good governance and the rule of law in Zimbabwe. However, we will not get there by rushing to an election next year. There is another way that is within the provisions of the Constitution and therefore lawful.

Section 58 of the Constitution guarantees right of citizens to freedom of assembly and association. Section 59 guarantees the right to demonstrate and present petitions provided that these rights are exercised peacefully. Section 149 gives every citizen and permanent resident of Zimbabwe the right to petition Parliament to consider any matter within its authority.

The situation is too dire to leave to politicians to solve. The solution is in the hands of the people. The people must be mobilised to exercise their right under the Constitution in a series of peaceful mass demonstrations to call for the resignation of the government and to present a petition to Parliament, with so many signatures that it cannot be denied, calling for the formation of an interim transitional authority.

ZANU PF is quick to cry treason when there is any suggestion of changing the government or criticising Robert Mugabe — witness the current charges that have been brought against Pastor Evan Mawarire — but we should not be deterred. How can it be treason for the citizens of a democratic country to call for the resignation of an oppressive, corrupt and incompetent regime? ZANU PF is now at its weakest and this is the time to free ourselves from the evil they have wrought on us and on our country.

We must not wait for yet another stolen election to trigger mass popular demonstrations. ZUNDE calls on a united opposition to organise massive and sustained public protests to call on the government to resign. Let us campaign for it and prepare our youth for it — starting now — and let them know that #This Flag and #Tajamuka have our total support.

ZUNDE proposes that the united opposition should call for an interim transitional authority, a caretaker government, to administer Zimbabwe until internationally supervised biometric voter registration is implemented followed by free and fair elections.

ZUNDE has led the campaign for everyone to register and vote. However, it has become clear that, before that can happen, the people must demand the resignation of the government and a transitional authority must prepare the way for transparently fair elections.

This is where Morgan Tsvangirai, Joice Mujuru and Tendai Biti will show their true colours. Will they reveal themselves as contestants locked in a bitter struggle for power or will they emerge as true leaders dedicated to uplifting the people and restoring the nation? Even though they might not want to, Tsvangirai, Mujuru and Biti will recognise the logic of this position and come around to this way of thinking.  Otherwise they are in for another hiding at the hands of Mugabe and ZANU PF.

There will be tough negotiations for the terms of reference of a transitional authority but the African Union, SADC and our neighbours, particularly South Africa and Botswana, will be forced to intervene and mediate. They cannot afford for Zimbabwe to fail.

As well as consisting of members of parliament, the transitional authority should include academics, technocrats, businessmen and regional representatives. It would be a bold move to appoint an independent prominent African such as Kofi Annan or Ian Khama to chair this body.

Fundamental to the healing of Zimbabwe will be the work of a Truth and Reconciliation Commission that will address the wrongs of Gukurahundi, Murambatsvina, land redistribution, and the plunder of Zimbabwe’s natural resources. However, setting up such a commission may properly be an initial task of a new government rather than the interim transitional authority.

What is of real concern is that so many Zimbabweans have adapted to life under ZANU PF. Instead of being actively involved in the political process, they keep their heads down and let the politics go on around them. They stoically put up with the blight of ZANU PF and think that, if they wait long enough, things will get better. Our greatest challenge is to motivate the masses. If the people are not prepared to be involved, we are doomed to another five years of the ZANU PF kleptocracy.

#This Flag and #Tajamuka have demonstrated that the people are ready to take action when they have courageous, innovative leaders. Morgan Tsvangirai is the leader of the largest opposition party and he is best positioned to mobilise the populace. It is time for him to show true leadership and mobilise his followers into organised and sustained public protests calling for the ZANU PF government to stand down so an interim transitional authority can be put in place. When he does this, he will guarantee that other opposition groups will join and support him. People are beginning to realise that Zimbabwe’s crisis is not going to be solved by elections in 2018. This is now a liberation struggle.

So, Nzira-Indlela, the ZUNDE roadmap to free and fair elections consists of three basic steps:

It has been said that insanity is doing the same thing over and over again and expecting different results. We cannot, we must not, participate in another election where the electoral process is controlled by ZANU PF. That would be madness indeed!