This bulletin is a summary of a report by the Zimbabwe Human Rights Commission [hereafter referred to as “the Commission” or “ZHRC”] recording its assessment of the human rights situation of communities in the Tsholotsho district affected by the floods experienced in the 2013/2014 rainy season. 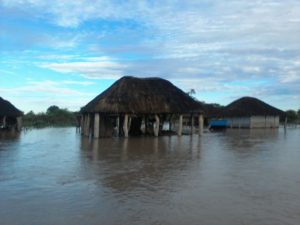 The report considered the actions of the entities sharing disaster management responsibilities in the context of the floods and made “recommendations designed to enhance the safety and well-being of the affected communities in future” [See the full text of the report on the Veritas website link.]

Although the report was produced over two years ago, we believe it is important to once again draw attention to its existence, for the following reasons—

That situation was the subject of another Human Rights Commission report [link] outlining the State’s responsibilities for displaced persons under the Constitution and international law [see summary in Veritas’ Commissions Watch 2/2017 link].  The recommendations in this report have not been implemented. More than three years after the disaster, many of its victims are still in the temporary Chingwizi Relocation Site awaiting permanent relocation.   This is a national disgrace.

Background to the Report

The Commission, in line with its mandate of promoting, protecting and enforcing human rights, conducted an investigative report on the situation in Tsholotsho which is in Matabeleland North Province.  The district was affected by floods during the 2013/2014 rainy season which resulted in displacement of some of community members. The Human Rights Commission, through its Commissioners visited the district from the 11th to 12th November 2014.

The main objective of the mission was to assess the human rights situation for all the affected communities, including determining the scope and extent of the emergency in the displaced communities from Butabubili, Gariya, Sandawana, Sasedza, and Kalave. In addition, the Commissioners set out to assess the humanitarian needs and the social impact of the floods on the affected population and the adequacy of Government’s arrangements in realising human rights and freedoms for the internally displaced persons.

The Commissioners used four tools for assessment, that is, key informant interviews, focus groups discussions, household questionnaires and participant observations. The key informant interviews collected in-depth information about the community from key stakeholders such as villagers, traditional leaders and teachers. The focus group discussions mainly captured the perceptions, opinions, beliefs and attitudes of the respondents towards human rights issues. Information was gathered from men, women, children and key informants in a permissive and nurturing environment that enabled them to have an open discussion and encouraged different perspectives and views towards the human rights issues that affected them. The platform also encouraged the participants to formulate opinions and ideas that exist in Tsholotsho in terms of beliefs, experiences, values and norms. The household questionnaires were formulated to have an in-depth view of the past and present situation in the Tsholotsho community. They were administered to twelve random households throughout the 25 km radius from the Butabubili Primary School. The team had intended to administer the questionnaires on a gender-balanced basis, but however, 70% of the occupants were women and this was so because the men had gone to work across the border in South Africa, to fend for their families. This gave an opportunity for the views of the women concerning the human rights issues that affected them to be heard since women were often excluded in meetings.

The Commissioners were faced with some challenges, the main one being unreliability of the statistics of the people affected by the flood and property lost since there were different accounts and views. Further, the people were tired of being interviewed and wanted assistance since they had been interviewed before and had been promised some assistance that had not materialised.

In assessing the flood situation in Tsholotsho, the Commissioners were guided by the constitutional, legislative and policy framework, as well as the regional and international legal framework.

Constitutional provisions  The report lists the following provisions of the Constitution as being of importance:  sections 71, 73, 75, 76, 77, 80, 81, 82 and 292. These basically enshrine fundamental and basic rights such as property rights, environmental rights, and the rights to education, health care, food and water, the rights of women, children, the elderly, and security of tenure for occupiers of agricultural land, respectively.

The findings by the Commissioners revealed that the impact of the floods differed from household to household. However, basically households were affected in the following ways—

The report commends the State for averting loss of lives by availing helicopters from the Zimbabwe Defence Forces to rescue affected people during the flood.  Also commended are the different Government Ministries, the District Civil Protection Unit, Civil Society Organisations, Faith Based Organisations, private individuals and entities who assisted the affected victims in various ways such as providing temporary shelter, blankets, clothes and basic building materials.

A key issue for concern was that despite all these efforts the State had nevertheless not managed to fulfil its basic obligations regarding the fundamental rights of the victims affected by the floods.  More still needed to be done in terms of assistance to victims to ensure the State corrected its shortcomings in fulfilling the rights of the victims to basic shelter, essential medical services and sanitation.

The Commission’s Recommendations for Legislation

None of this legislation has been passed so far.  Nor have Bills for these purposes yet reached Parliament.

Veritas recommends a visit to the website of the Human Rights Commission at http://www.zhrc.org.zw/.