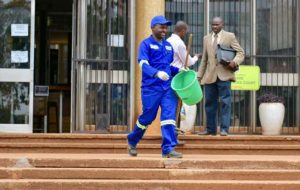 Magistrate Sande granted Sipikita $30 bail and ordered him to report at CID’s Law and Order Section at Harare Central Police Station once a week on Fridays among some of his bail conditions.

The 28 year-old Sipikita, who was represented by Kuzivakwashe Ngodza of Zimbabwe Lawyers for Human Rights, was charged with criminal nuisance as defined in Section 46 as read with paragraph 2 (v) of the third schedule of the Criminal Law (Codification and Reform) Act Chapter 9:23.

Prosecutors claimed that Sipikita, a resident of Budiriro high-density suburb in Harare, staged an unsanctioned protest on Thursday 13 July 2017 outside Harare Central Police Station, where he allegedly displayed a placard inscribed “Failed Mugabe Must Step Down.”

The prosecutors charged that Sipikita upon being searched by police officers who arrested him was also found in possession of another smaller placard inscribed “We need jobs employment is a right”.

Sipikita’s actions, the State charged, were likely to interfere with the ordinary comfort, convenience, peace or quiet of the public and were likely to create a nuisance.

Meanwhile, Magistrate Sande on Thursday 13 July 2017 granted an application filed by pro-democracy campaigners Patson Dzamara and Makomborero Haruzivishe for the stay of community service pending the hearing of an appeal in the High Court against their conviction and sentence for participating in an anti-government protest last year.

Dzamara and Haruzivishe were sentenced by Magistrate Sande to serve 315 hours of community service at Harare Magistrates Court and at Borrowdale Police Station respectively after they were convicted for obstructing and defeating the course of justice in contravention of Section 184 of the Criminal Law (Codification and Reform) Act Chapter 9:23.