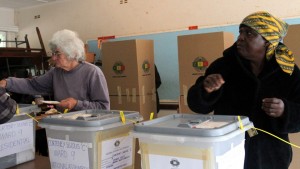 Chiwundura Constituency is scheduled for a by election on the 15th of July 2017. Heal Zimbabwe through its resident human rights monitors has been monitoring the electoral environment preceding the plebiscite. From the information gathered by the organisation since the proclamation of the election date by the Zimbabwe Electoral Commission (ZEC) in May 2017, the environment is generally peaceful with sporadic cases of human rights violations being recorded. Four candidates, Brown Ndlovu- ZANU PF, Brighton Mudzwiti- FreeZim Congress, Takudzwa Guzete- National Constitutional Assembly (NCA) and Webster Zulu- Progressive Democrats of Zimbabwe (PDZ) are contesting for the Parliamentary seat. The seat fell vacant after the death of Kizito Chivamba (ZANU PF).

Some of the violations recorded in Chiwundura Constituency between 15 June 2017 to date:

On the 15th of June 2017, Colonel Kahuni (from the army) called for a meeting with village heads at Chief Chiwundura’s homestead. At the meeting, Col Kahuni told the village heads that they should make sure all the people who fall under their jurisdiction vote for ZANU PF ahead of the by election, failure will result in the traditional leaders being dethroned from their positions.

Village head Kisimusi Magama, who resides in Varozvi Village called for a meeting at Gambiza hall on the 8th of July 2017 were he instructed community members present to all vote for ZANU PF candidate, Mr Brown in the upcoming by election or risk being evicted from the area.

On the 6th July 2017, Mr Brown the ZANU PF candidate held a rally at Boulder Primary School. At the rally, Col Kahuni who was also present addressed the public and threatened them with death if ZANU PF does not win resoundingly in the by election. His threats were buttressed by a war veteran identified as Mr Hundivenga, village heads Gideon Muputa and Otilia Sileba who also took turns to threaten people with violence and death if ZANU PF fails .to garner a 100% victory.

On the 8th of July 2017, village head Tarisa Kamba addressed a rally organised by ZANU PF officials at Game Park Farm Centre. During his address, he threatened people with violence if the other contesting candidates get any votes in the area. The village head reminded people of the 2008 election violence and warned them to vote “wisely”.

On the 7th of July 2017, the ZANU PF District Political Commissar, Sam Mugadza force- marched village heads to mobilise people to attend a meeting that was supposed to be addressed by Mr Brown. The village heads out of fear mobilised community members but the meeting failed to take off after the candidate failed to turn up.

An army officer, Jabulani Mateuro is moving around villages in Mlezu ward 12 threatening people with violence if they fail to turn up on election day and vote overwhelmingly for ZANU PF.

Heal Zimbabwe continues to call upon the people of Chiwundura to exercise their democratic right of voting in peace and shun all forms of violence that discredit the election. The generally peaceful environment can be attributed to the lack of stiff competition in terms of the political parties participating after main opposition political parties boycotted the election.

NB: Heal Zimbabwe is currently operating a 24hr early warning and early response system ahead of the 2018 elections. Please feel free to report any cases of human rights violations on the following number: +263 078 599 910