Harare - Former president Thabo Mbeki has provoked the ire of Zimbabwean opposition parties after he claimed that the British regime change policy on Zimbabwe was not for the benefit of the local majority but for the welfare of its "kith and kin". 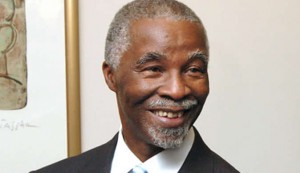 Mbeki said during a more than two-hour interview with Gauteng-based radio station Power FM on Thursday last week that Britain’s criticism of South Africa for its “quiet diplomacy” on Zimbabwe was part of London’s regime change strategy on Harare.

Mbeki was appointed by the Southern African Development Community (SADC) to broker a political deal that resulted in the formation of a unity government between President Robert Mugabe and former prime minister Morgan Tsvangirai in 2009 following disputed elections in 2008.

Mbeki maintained that the stance taken by South Africa on Zimbabwe during that time was to allow the country to solve its own problems.

Mbeki said alongside South Africa, Algeria and Kenya, Zimbabwe still had a larger number of white Europeans who remained in the country.

“You still had a significant number of white people in Zimbabwe after independence. Part of the argument used by (former UK Prime Minister) Margaret Thatcher when she was against the imposition of sanctions against the (Ian) Smith regime was that ‘we have a lot of kith and kin in Zimbabwe. If we impose sanctions which actually work, you will then get half a million or quarter of Zimbabweans or whatever emigrating to England and suddenly we will be landed with a large refugee population coming from Zimbabwe (then Rhodesia)’.

Following disputed elections in Zimbabwe in 2000 and alleged human rights abuses by the Mugabe administration, the West imposed sanctions on the nonagenarian and his inner circle.

MDC vice president Nelson Chamisa told News24 that Mbeki was “burying his head in the sand”, adding that the British were only buttressing what the majority of Zimbabweans want.

“Mr Mbeki is burying his head in the sand by ignoring the fact that the problem in Zimbabwe is Mugabe and not the British. You cannot expect to get an answer from a wrong question and what we have in Zimbabwe is a dictator in the name of Mugabe who has failed to run the affairs of the country, hence, we are saying there has to be change to meet the clearly looming obstacle,” said Chamisa.

“Mr Mbeki has failed to correct Mugabe; any responsible African should be able to tell leaders where they are wrong instead of shying away from real problems.”

“The British have nothing to do with rampant corruption and nepotism that Zanu-PF specialises in. For Mbeki’s information, nothing has been left of Zimbabwe, rather the white commercial farmers who once made Zimbabwe a bread-basket have moved to other countries in southern Africa where their expertise are doing wonders to countries like Zambia and South Africa,” said Nyandoro.

Added Nyandoro: “Mbeki remains the chief architect of the doomed Global Political Agreement which he engineered to ensure Mugabe’s survival since it is only Mugabe’s failed leadership in perpetuity that would guarantee South Africa’s continued benefitting from Zimbabwe’s human capital and business opportunities.

Mujuru’s lieutenant said Mbeki’s utterances were a negation of the revolutionary ideals for what South Africa stood for when South Africans fought apartheid.

“It only demonstrates the bankruptcy of African statesmanship that lacks the spine to tell a fellow African leader the truth.”

Political Analyst and Director of the Crisis in Zimbabwe Coalition, Memory Kadau, said it was unfortunate that Mbeki continued to shy away from the fact that there was dictatorship in Zimbabwe.

Mbeki is ‘wrong on Zimbabwe’

“President Mbeki is a solid statesman and his love for Africa and its people is uncontested. He is, however, wrong on Zimbabwe, he continues to shy away from the fact that there is a dictatorship in Zimbabwe, said Kadau.

He added: “Since 2009 when he brokered the Global Political Agreement  (GPA), which  brought temporal solutions to the Zimbabwean crises. His quiet diplomacy foreign policy on Zimbabwe during his presidency remains partly to blame for the continued crisis, Zimbabwe could have resolved ages ago, had he chosen a harder stance.

“The Zimbabwean issue can not be and is not solely a British interests issue. It is a national crisis requiring regional and international solutions. Zimbabweans continue to ask whose interests was he protecting and continue to protect? Thousands who died during the 2008 presidential runoff and millions that continue to seek refugee at his doorstep are telling of an impeding catastrophe.

“The welfare and aspirations of Zimbabweans are far much more important than those of the political elite.”

British ambassador to Zimbabwe, Catriona Laing, was not immediately available for comment.