HARARE, Zimbabwe — Police in Zimbabwe have fired tear gas and water cannons to disperse dozens of opposition supporters protesting what they say are plans to rig next year’s presidential election. 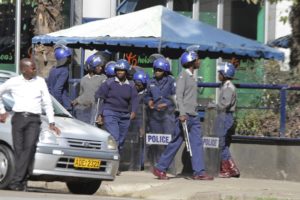 The main opposition MDC-T party, which organized the protest in the capital of Harare on Wednesday, alleges that the country’s elections management body is plotting to ensure a victory for 93-year-old President Robert Mugabe. The elections body denies the claims.

Mugabe is currently in Singapore for medical treatment.

Activists, shoppers and street vendors hurried for cover as police moved to break up the protest. People lining up for cash at banks — a common sight in the economically troubled southern African country — were forced to abandon their spots in the chaos.