Youths in Tsholotsho North and Zaka have vowed to uphold peace and encourage tolerance ahead of the 2018 elections. This came out during two Youth Sports for Peace tournaments held in Zaka and Tsholotsho North on the 1st of July 2017. 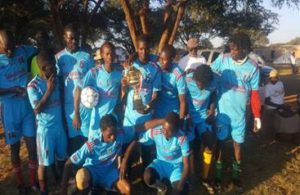 The tournaments were organized by community peace clubs and Community Based Organizations (CBOs) established by communities that work with Heal Zimbabwe in Zaka and Tsholotsho North respectively. The sports for peace tournaments are part of Heal Zimbabwe’s National Peace Campaign dubbed 13 Million Voices For Peace. The objective of the Campaign is to mobilize communities and their leaders to publicly shun violence and encourage peaceful coexistence before, during and after the 2018 general elections.

In Tsholotsho North, two community peace clubs that operate in wards 5 and 3 organized a Youth Sports for Peace Tournament at Sipepa Secondary school. The tournament saw 8 soccer and 8 netball teams from 4 wards battling it out for the prestigious peace cup. Before the tournament kicked off, all the participating teams made peace pledges and promised to uphold peace in their communities ahead of the 2018 plebiscite. Ordinary community members also signed peace pledges and promised to spread the message of peace. The tournament was attended by a total of 10 Village heads, 3 neighbourhood police members, Village Development Committee members (VIDCO) and 1 Headman.

Headman Mcetshwa, who has jurisdiction over 23 Villages was the guest of honour at the Sports for Peace Tournament. In his address, Headman Mcetshwa underscored the need for peace in Tsholotsho North and acknowledged the importance of sports for peace tournaments as they help rebuild relations and tolerance among youth. “…Sports for peace tournaments are key in building tolerance and peace amongst youths. Im ecstatic to see the youths pledging to uphold peace. We all have a responsibility to build peaceful communities…” he said. At the same occasion, Heal Zimbabwe Programmes Manager, Cleto Manjova echoed Headman Mcetshwa’s sentiments by highlighting that building peaceful communities is key to achieving social cohesion and peaceful coexistence, elements that promote credible electoral processes. Sundowns won the peace cup in the soccer category while Pirates won in the netball category.

In Zaka, the Youth Sports for Peace Tournament was conducted at Mushungwa Secondary School and 6 soccer and 6 netball teams drawn from Ward 19, 18, 13 and 24 competed for the Peace Cup. The tournament was organized by Heal Zimbabwe community peace structures. Before kickoff, all the participating teams pledged to uphold peace ahead of the 2018 elections and vowed to continue utilizing sports as a tool to propagate tolerance and peace. The tournament was attended  by 2 Councillors, 7 village heads, 1 headman and 11 WADCO members.

In his speech, ward 19 Councillor Peter Imbayarwo highlighted the need for youths to shun violence and guard against being used to perpetrate violence. “…I appeal to the youths to shun violence but instead be ambassadors of peace because we need peaceful 2018 elections..”, he said. Jerera City won the peace cup in the soccer category while Kushinga won in the netball category.