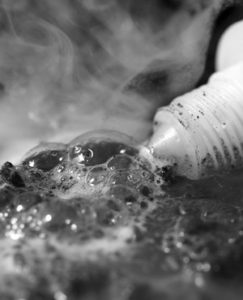 The chemical has seeped hundreds of metres from the crash site, near Dete, and is now threatening a local river.

The truck was Zambian-registered, the report said.

Zimbabwe’s Environmental Management Agency arrived on the scene of the accident within an hour, a source living near the area told News24.

The driver and his assistant were injured but rescued alive, the source said.

As the authorities battle to minimise lasting environmental impact, diggers have been brought in to excavate the contaminated soil and put it into a decontamination pit with a neutralising agent. Volunteers and technicians are helping in the exercise.

Sulphuric acid can be hazardous to the skin if it comes into contact with it. The authorities will be trying to stop the leak contaminating water sources.

In 2009 a tanker carrying sulphuric acid overturned and spilled around 1 000 litres of the chemical outside the central mining town of Kwekwe.

Hwange National Park is where Cecil the lion lived before he was killed in 2015. Cecil’s son Xanda was also shot dead in the area by a hunter early this month.