Maize seed in drought-prone regions of Zimbabwe should by now come with a government health warning: “Planting can seriously damage your well-being”. 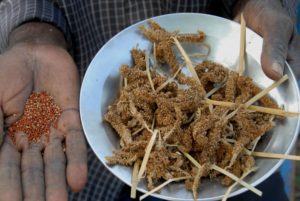 That’s because although maize delivers like a champion under the right conditions, it’s highly vulnerable to water stress. If the rains come too late, or even too early, the crop is a write-off.

Tariro Moyo knows this from bitter experience. A communal farmer in Gwanda, in southern Zimbabwe, she has continued to plant maize despite her yields decreasing with each bad season.

“Last year, I watched all my maize crop wilting and dying due to drought,” she told IRIN. “I [had] used all my money to buy maize seed and fertiliser in anticipation of a good harvest.”

Gwanda is in Matabeleland, a region hit by successive poor harvests linked to one of the strongest El Niño events on record. Deep rural poverty and a lack of access to financing means farmers here are forced to rely on rain-fed production and cannot afford irrigation systems.

Climate change will mean still dryer conditions for Zimbabwe. Given that scenario, the challenge for the government and research bodies is how to develop and promote alternative crops that offer farmers some resilience.

Drought-tolerant small grains such as finger millet, pearl, and sorghum were the traditional foods in Zimbabwe long before maize became the dominant crop across southern Africa more than a century ago.

But reviving them means overcoming significant challenges. The reason maize won out is because it is much higher yielding, requires less labour, and its outer husk provides good protection from birds and other pests.

A powerful agro-industry markets maize meal as the cornerstone of Zimbabwe’s food culture and family life. Millet and sorghum are available on supermarket shelves, but they represent much more of a niche market.

“Very few people buy small grains as compared to maize,” said Moyo, explaining the major production downside: “The amount of time spent and labour needed to prepare these small grains is too much for me. Besides my husband, I have no one to help with farming work as all my children are away.”

Kizito Mazvimavi, the executive director for the International Crop Research Institute for Semi-Arid Tropics, countered: “There is need for labour in any farming activity.”

But even though his organisation promotes small grains, he acknowledged that the technology for processing them “is limited and not readily available in many rural areas” – an additional problem that makes uptake harder still.

Moyo said she was not opposed to small grains if they made economic sense, especially given the lottery that maize production has become.

“If they improve my livelihood and, with the necessary tools and equipment, can be the best for me, I cannot continue to put money into waste,” she concluded.

Research to the rescue?

This is the gap that researchers and the government need to fill, argues Shepherd Siziba, chair of the Agricultural Economics and Extension Department at the University of Zimbabwe.

Not enough is being done to ensure the relevant research is being understood and acted upon by farmers in the field like Moyo, Siziba told IRIN.

“Theses are being done at universities and literature on climate change generated, but what is missing is the intensive interaction between policy, research, and farmers,” he added.

“Farmers continue to grow maize where it’s not working,” he said. “Though the adoption of small grains has improved, uptake has been slow.”

Even though small grains are seen as a critical component of adaptation to climate change, there is no effective support to champion production.

One simple example: The government continues to distribute maize seed as a drought recovery measure in arid regions instead of more appropriate small grains.

“There is a need for deliberate efforts through availing small grains seed, creation of markets for the crops, and providing appropriate technology to lessen the time spent and labour needed for the production of small grains,” said Kutukwa.

The vital link in that chain between the research and production should be the government’s agriculture extension workers.

They are supposed to provide farmers with information on best practice, including climate change adaptation techniques. But in the face of Zimbabwe’s decade-long economic crisis, they have been starved of funding.

Ideally, there should be one extension worker for a maximum of 300 farmers, according to Donald Mbangani, an agribusiness specialist at the Agriculture and Extension Services Department. In reality, each officer has double that caseload – and no transport is provided.

There are also few training and refresher courses available to equip the officers with the skills they need, let alone the necessary equipment, from laptops to motorbikes.

If Zimbabwe seriously wants to build resilience to climate change, what is really needed is to “strengthen the research, extension [worker], and farmer linkage,” said Mbangani.

This, he said, would mean that as new crop varieties and farming technologies are developed, there is collaboration at the research trial stage “with the farmer and agriculture extension workers involved.”

The urgency of the reforms is underlined by the successive poor harvests Zimbabweans have endured. At the peak of the 2017 lean season, 4.1 million people were estimated to be food-insecure because of El Niño-induced drought.

Zimbabwe’s food relief programmes are already underfunded, and now there are threats by President Donald Trump’s administration to cut US aid to Zimbabwe, including programmes designed to reduce the effects of climate change.

The country could be running out of time to get its crop strategy right.