When a vapid and rabid dictatorship enters the end of its days, some very strange and bizarre things begin to manifest themselves. 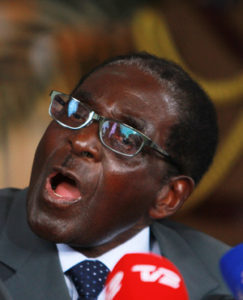 The nation learnt with shock and consternation when the crumbling and faction – infested Zanu PF dictatorship on Friday, August 18, 2017, announced that February 21 has been declared a public holiday in honour of Robert Mugabe.

The MDC join the millions of exasperated Zimbabweans in expressing our utter shock and complete disappointment at this ridiculous decision to declare Robert Mugabe’s birthday as an official public holiday starting from next year.

Whilst it’s a very well – documented fact that Robert Mugabe, over the decades, has mutated into a fully – fledged despot  and tin pot dictator, we never imagined that the insipidly corrupt and Stalinist Zanu PF regime would descend to the level of venerating and idolising their tyrannical ruler by declaring his official birthday as a public holiday in Zimbabwe.

Let us hasten to emphasise that Robert Mugabe is not Zimbabwe and Zimbabwe is not Robert Mugabe. This weird and boot – licking concept of reducing Zimbabwe into a personal fiefdom of Robert Mugabe and his family must be condemned in the strongest of terms.

Zimbabwe is the land of many distinguished nationalists and national heroes such as Joshua Nkomo, Herbert Chitepo, Jason Ziyapapa Moyo, Josiah Magama Tongogara, Leopold Takawira, Eddison Zvobgo, Samuel Parirenyatwa and many other illustrious sons and daughters of the soil.

What then makes Robert Mugabe so special as to warrant the declaration of his official birthday as a public holiday in Zimbabwe? We already have the Heroes’ public holiday that commemorates the lives of all heroes and heroines of our mighty motherland. In fact, nationalists in the mould of Joshua Nkomo and Herbert Chitepo entered the hustle and bustle of politics years before Robert Mugabe even dreamt of becoming an active politician. These nationalist luminaries, indeed, have a much higher and more iconic heroe status when compared to the likes of Robert Mugabe who was not even there when both ZAPU and ZANU were formed.

The MDC fervently and passionately advocates for the building of strong national institutions as opposed to building strong personalities. We appreciate that people and leaders come and go but Zimbabwe will always be there for generations to come. Thus, no single Zimbabwean should be venerated and idolised to the extent of making them a demi- God.

The armed liberation struggle against colonial and racist exploitation and subjugation was fought primarily to enable all Zimbabweans, regardless of race, colour or creed, to equally enjoy the fruits of their country and also for all people to be treated as equals.

It is an insult to the suffering and toiling youths of Zimbabwe to declare February 21 as a National Youth Day. What has Robert Mugabe done for the youths besides trashing their dreams and destroying their hopes and aspirations through decades of misrule, mismanagement of the national economy and rampant corruption?

We trust that a truly democratic and progressive government in Zimbabwe will move in very swiftly to scrap out this ill – deserved and fascist public holiday called the Robert Mugabe National Youth Day.