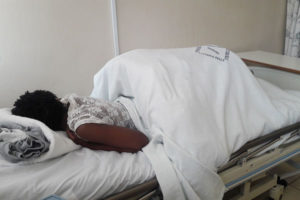 VICTORIA FALLS-Zimbabwe Lawyers for Human Rights (ZLHR) has intervened to ensure police officers who tortured a woman into miscarriage pay for their deeds. Zibusiso Moyo has spent more than a month in hospital, as she battles to recover from the horrific injuries. In the meantime, her lawyer Thulani Nkala of Dube and Company, a ZLHR member, has written to the Zimbabwe Republic Police (ZRP) officially notifying the organisation about Moyo’s intention to sue for damages in terms of the State Liabilities Act.

“You are hereby notified that our client shall be instituting a civil claim against yourselves and all relevant parties for damages resulting from the actions of the police officers,” reads the notice.Moyo wants the police officers to pay for their “Gestapo style actions” that have left her maimed.“Despite the physically excruciating pain that our client is still going through, she is also suffering from emotional trauma, embarrassment and anxiety and loss of life amenities and necessities,” wrote her lawyer.

Further, Moyo wants the perpetrators of the torture to face criminal charges.“We would like to know the full particulars of the police who were involved in the incident and what, if any, has your organisation done regarding this incident,” the lawyer demanded.In response, the officer commanding Victoria Falls police, Chief Superintendent Jairos Chiwona, said the notice had been forwarded to the organisation’s lawyers for consideration. ZLHR took up the case as part of its anti-impunity campaign, which has so far resulted in several police officers being forced to pay thousands of dollars in damages to victims of their heavy handedness.