For a number of years Zimbabwe has been meandering in the corridors of confusion, leadership failure and despondency. Lurching from one crisis to another and perpetually yearning for the ever elusive prospect of a transition has become the norm for the nation which was once the bread basket of Africa. 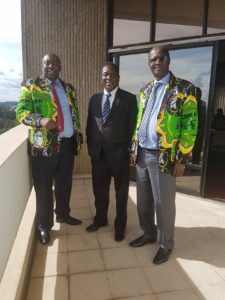 Smoking the peace pipe outside the Zanu (PF) headquarters yesterday before a politburo meeting. From left to right: Saviour Kasukuwere, Emmerson Mnangagwa and Jonathan Moyo.