…pledge to uphold peace ahead of the 2018 elections. 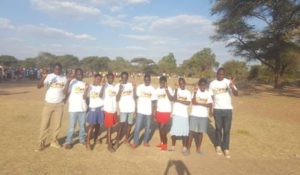 First time voters pledge to uphold peace in their community during the Gokwe peace cup.

Youth in Gokwe South and Gutu Central have commended Heal Zimbabwe for initiating sports for peace tournaments in their areas as they help to promote peace and tolerance among community members. This came out during two sports for Peace tournaments conducted in Gokwe South, ward 9 at Rugoro Primary School and Gutu Central, ward 37 at Gutu High school on the 12 August 2017.

The Peace tournaments were part of commemorations for the International Youth Day. The Youth day commemorations were running under the theme, “Youth Building Peace”,  The theme was dedicated to celebrate young people’s contributions towards conflict prevention and transformation, social justice and sustainable peace. Cognisant of the fact that in past elections in Zimbabwe youths have been used to perpetrate violence, Heal Zimbabwe utilised the sport tournaments to encourage youth to be peace ambassadors and spread the message of peace in their respective areas.

In Gokwe South, a total of eight soccer and six netball teams drawn from three political parties participated in the tournament. The sports tournament was attended by community leaders that include 4 village heads, 3 councillors and an official from the Sports and Recreation Commission. A total of 700 community members attended with the majority being youths. In Gutu, a total of eight netball and soccer teams drawn from four political parties participated in the Sports tournament. The tournament was also attended by 5 village heads, 2 councillors and one Chief. A total of 400 community members attended the peace cup.

The team captains from the participating teams made peace pledges before kick-off and underscored the need for youth to shun violence during electoral periods. “…Today we make a commitment to promote and uphold peace. We will not engage in violent activities. As youth we must be the beacon of hope in promoting peace in the whole country. We must desist from engaging in violent activities and live together peacefully as one people, said one of the team leaders.

Community members who attended the sports tournaments also echoed the youths’ sentiments on the need to uphold peace as this brings development. In Gokwe South, Savaranda Tigers football club won the soccer trophy whilst Bravo netball team scooped the netball trophy. In Gutu, Runyowa netball team won the peace cup while Young Stars won the in the soccer category respectively.

The sport for peace tournaments are some of the many peace building initiatives currently being conducted by Heal Zimbabwe country wide under its 13 Million Voices For Peace campaign aimed at encouraging Zimbabweans to uphold peace before, during and after the 2018 elections. To date, youth teams from areas such as Tsholotsho North, Mazowe, Murehwa, Rushinga, Chipinge, Makoni, Mutasa, and Zaka have all publicly pledged to uphold peace.