President Robert Mugabe proclaimed on 8 September 2017, that Biometric Voter Registration (BVR) will commence on 14 September and end on 15 January 2018. Heal Zimbabwe through its resident human rights monitors in all the country’s 10 provinces has been monitoring the political environment since that proclamation. 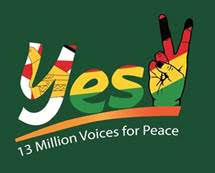 Heal Zimbabwe is a peace building organization that envisions a peaceful and prosperous Zimbabwe that celebrates diversity in local communities. The organization is currently running a National Peace campaign : #13MilVoices4Peace aimed at raising awareness on the need for peace before, during and after the 2018 elections.

Below is an update of the voter registration process from 18-21 September 2017:

ZANU PF ward 4 chairperson on 18 September was distributing affidavit forms to community members and informing them that if they fail to register they will not receive any food aid.

ZANU PF ward chairman, Happiness Kapumha on the 19th of September 2017 intimidated community members who were preparing to register to vote at Hurungwe RDC offices by threatening them with violence if they fail to register. Kapumha also highlighted that all the people assisted by ZANU PF to acquire identity cards were supposed to vote for ZANU PF in the coming elections or risk being beaten up next year.

On 21 September 2017, ZANU PF ward chairperson, George Chidhuza told people at Gapare shopping centre that the Biometric Voter Registration process allows ZANU PF to monitor voting patterns thus enabling the political party to see who would have voted for the opposition. He then urged community members to ensure that they vote for ZANU PF to avoid being beaten up next year.

By close of business on 21 September, there were no recorded cases of harassment or intimidation at Murewa Rural District Council. But several people especially in surrounding wards were not aware that the BVR process had commenced.

There were no recorded incidences of violence or intimidation at Chimanimani Rural District Council. But the challenge was people were expected to certify their affidavit forms at Council offices where they were several ZANU PF youths dressed in their party regalia thus intimidating the electorate. Others who failed to turn up to register decried that the centre was located far from where they reside. One of those interviewed highlighted that she was supposed to travel 70 km to get to the centre.

No incidences of human rights violations were recorded at Chingaira Building, DA Complex in Makoni during the period under review. But Fewer people came for registration with others interviewed bemoaning inaccessibility of the center as most of them had to travel long distances using bus fares ranging from between $5 -$10.

No incidences of violence or intimidation were recorded.

The registration process did not commence well as the process was slow. On average it was taking 30-45 minutes for one person to be registered. The centre also did not have a Commissioner of oaths to sign affidavits for people. This resulted in many people failing to register to vote.

No incidences of human rights violations recorded at the centre. But people interviewed by our human rights monitors complained that they had to travel long distances as far as 60 km to get to the registration centre.

No cases of human rights violations were recorded at the registration centre. The only challenge being experienced is that the centre is located far with the furthest area being ward 24 and 23 (Chiwenga area and Kaerezi area) which are located about 140km away.