Poor links with Washington a problem, but new green alliance could include Harare 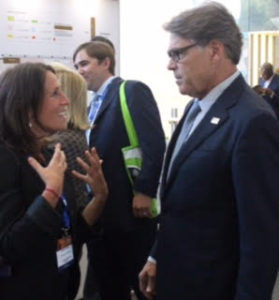 Cape Town – High levels of debt and on-going sanctions against the Mugabe regime could leave Zimbabwe out of a US investment plan to electrify Africa.

In Cape Town last week, one of the most senior members of the Trump administration, Rick Perry, laid out a policy of aid and finance to build new power stations across the continent and link millions to the grid.

“We will use whatever is needed,” he said. “Oil, gas, coal or wind power are all in the mix, but African countries must be free to choose what works best for them.”

Mr Perry, a former governor of Texas and now secretary of state for energy said he favoured fossil fuels, but what he called “intermittent energy” from wind and solar that works under the right weather conditions could top-up supply.

He said the US would only engage in “clean energy for Africa,” using latest technology where coal or gas was used.

But with Harare already in arrears on its global loans including just over a billion dollars to the World Bank and half that amount again to the African Development Bank, analysts said it was not “an attractive target for investment.”

At the Ministry of Finance and Economic Development, permanent secretary Willard Manungo said Zimbabwe was “ready to pay its debts,” but with fuel imports hampered by a lack of foreign exchange and growing problems with South Africa over arrears to Eskom for electricity, there are doubts the country will be able to meet its obligations.

Zimbabwe has recently paid off $110m to the IMF, with reports in the state-owned media that other creditors would soon receive their money.

However the man bar to Zimbabwe’s inclusion in Mr Perry’s plan for new power stations may be the targeted sanctions – in place for more than a decade – that bar President Mugabe and his closest allies from entering the United States.

The bans began under President George W. Bush, and Donald Trump has shown no appetite for a change in policy.

The State Department recently made clear that “easing of restrictive measures, including targeted sanctions and travel bans, will only occur in the context of credible, transparent, and lasting democratic reforms.’

The US remains the world’s largest donor to the country, with most of the money going to HIV.

Green alliance a chance for Harare

The grouping, he said, would include the US, India, Australia, “and countries in Africa”.

Officials said it would be difficult to proceed with such a plan in Africa without Zimbabwe since it has some of the continent’s largest deposits. However, they said, the approach would need to come from Harare.

A diplomat at the Cape Town meeting who asked not to be named said, on energy policy, there was, “an unusual lack of politics,” within the administration.

“They seem to have India and South Africa at the table and there’s interest from Tanzania and Nigeria. If Zimbabwe made an approach to be part of this clean coal alliance Secretary Perry is talking about, we might be surprised at the response,” she said.

In the 1970s, the country had a surplus of electricity, but some of the poorer black areas were not wired up until Mr Mugabe took office in 1980.

However, since 2010, the state-owned Zimbabwe Electricity Supply Authority has all-but collapsed, with regular outages. Despite hydro power from dams, and an abundance of coal, the grid has fallen into disrepair.

Mr Perry said his plan for Africa was not just about generating power, “but making sure it is wired to homes and industry.”