Gauteng – With pressure mounting against President Robert Mugabe to step down, the issue of where he would seek asylum has become a hotly contested issue, with many saying South Africa is the obvious choice. 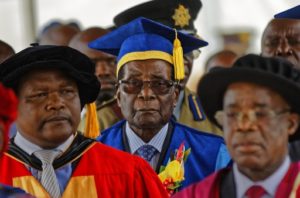 Zimbabwe’s President Robert Mugabe, center, arrives to preside over a student graduation ceremony at Zimbabwe Open University on the outskirts of Harare, Zimbabwe Friday, Nov. 17, 2017. Mugabe is making his first public appearance since the military put him under house arrest earlier this week. (AP Photo/Ben Curtis)

The move to grant him asylum has been welcomed by, among others, the Economic Freedom Fighters and African diaspora, but has been slammed as unethical and illegal by the likes of Cope and the Democratic Alliance.

Granting the ageing authoritarian leader asylum in South Africa is further complicated by the current criminal case his controversial wife Grace is facing in South Africa, following her alleged assault on 20-year-old model, Gabriella Engels, with an extension cord at a Sandton hotel in August.

Lobby group AfriForum, acting on behalf of Engels, have vowed to prosecute the first lady if she returns to South Africa, with their chief executive, Kallie Kriel, saying they were already in the process of having Grace’s diplomatic immunity revoked through the courts.

Mugabe, who has held onto power for 37 years has shot down a proposed exit deal, forcing the implementation of Plan B. This has resulted in all 10 Zanu-PF provinces passing a vote of no confidence against him, declaring that the 93-year-old was unfit to lead both the ZANU-PF and government.

Once Mugabe is officially removed as Zanu-PF leader, it is believed there will be a push to have him impeached early next week.

It is understood that, should Mugabe and his family be granted political exile in South Africa, they would be provided a residence by the government, for security reasons, despite the family owning numerous mansions in the country.

Both COPE and the DA have spoken out against the country providing asylum to Mugabe, while the EFF and African Diaspora Forum have welcomed the proposal.

DA call for asylum to be denied

DA leader Mmusi Maimane said the government would be breaking the law if it were to grant Mugabe political asylum.

“We are of the view that this would be a violation of South Africa law, and as such President Jacob Zuma must make a public statement rejecting such an outcome,” he said.

Maimane said allowing Mugabe into South Africa on political asylum would be in contravention of the Refugees Act.

“Mugabe has, like many other leaders on the continent, turned from liberator to dictator, with human rights abuses and crimes against peace being committed under his watch,” said Maimane.

“As such, he ought to be denied refugee status as per the law,” Maimane said.

“As long as Mugabe would not face torture or death penalty in Zimbabwe, the South African government must exclude him from asylum.”

Maimane said Mugabe must step down immediately and Zimbabwe should go to the polls to elect a new government.

Cope also called for Mugabe to be denied asylum, saying this would go against the values and principles of the South African Constitution.

EFF: Mugabe one of us

The EFF condemned Maimane’s stance, saying no court of law in the world had found Mugabe guilty of human rights violations.

“President Mugabe remains one of us despite his many mistakes as president of Zimbabwe. As a matter of fact, he does not need any passport to come and live in South Africa and we shall never confine our relationship with him as an African leader to colonially imposed borders,” said EFF national spokesperson, Mbuyiseni Ndlozi.

Ndlozi said Mugabe’s moral record, with all its weaknesses, was still superior to moral records of many in the ranks of the DA who had actively participated, benefited and continued to benefit from apartheid crimes against black people.

Ndlozi said the DA’s anti-pan-Africanist position was “driven by vengeance for white Rhodesians whose farms were taken following the failure of the British government to implement the Lancaster Agreement”.

“In the name of the properties of these whites, DA wants South Africa to reject Mugabe as a form of punishment,” Ndlozi said.

Ndlozi said the EFF called on the ANC to be decisive and grant Mugabe political asylum.

“This will advance peace in Zimbabwe and provide even better conditions for Zimbabweans to move faster into a better future under a democratic civilian rule,” he said.