Zimbabweans gathered in Africa Unity Square opposite the Parliament to call for President Robert Mugabe to step down. Follow the live updates. 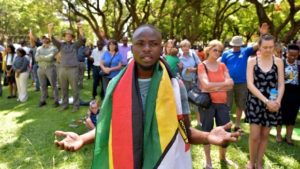 Zimbabweans gathered in Africa Unity Square opposite the Parliament on Monday to call for President Robert Mugabe to step down.

The gathering was a prayer meeting that’s planned for every day this week until Mugabe steps down, with calls for churches, civil society and ordinary people to be included in the talks for an inclusive government.

Doug Coltart, one of the organisers of the gathering and the organiser of #ThisFlag, said they had claimed the space opposite parliament, and would be meeting there daily.

“We want Mugabe to step down. We want him to go peacefully,” he said.

15:31
ShareIcon
Should the bloodless coup in Zimbabwe succeed, could this embolden the anti-Zuma faction inside the ANC to take more decisive action, asks Nontsikelelo Mpulo.
14:52
The army has been the pillar – it’s been central of President Robert Mugabe’s leadership – SAFM commentary on the Zimbabwe crisis
14:50
“All of us were shocked, but if you go back, signals were out there” – SAFM commentary on the Zimbabwe crisis
14:49

Military chiefs and senior figures in the ruling ZANU-PF party have been examining ways in which they can punish the Mugabe family and seize the assets they accumulated over the last four decades.

The Mugabes own more land than any other individual in Zimbabwe ever has – both before and after independence in 1980. – The Times

14:36
The Zimbabwean army said it would make a statement in response to the crisis triggered by President Robert Mugabe’s refusal to go. – AFP
14:33
Zanu PF members are meeting behind closed doors at the moment
14:33
Most of our leaders fail to realise that the power resides with the masses – SAFM commentary on the Zimbabwe crisis
14:24
ShareIcon
When the time is right, a good leader knows he must leave – SAFM commentary on the Zimbabwe crisis Robert Mugabe has “lost the support of the people and of his party”, Britain said Monday after the Zimbabwean president insisted he still holds power despite a military takeover and demands to quit.

14:14
The booing of Grace Mugabe at a rally precipitated the firing of Zimbabwean vice president Emmerson Mnangagwa and the coup
14:12

Robert Mugabe has “lost the support of the people and of his party”, Britain said on Monday after the Zimbabwean president insisted he still holds power despite a military takeover and demands to quit.

“As last night’s events showed, we don’t yet know how developments in Zimbabwe are going to play out,” Prime Minister Theresa May’s official spokesperson said.

“But what does appear clear is that Mugabe has lost the support of the people and of his party.   “We would say that while the situation remains uncertain, we would appeal for everyone to refrain from violence. We hope to see a peaceful and swift resolution to the situation.”

In a televised address late on Sunday, Mugabe defied expectations he would quit, pitching the country into a second week of political crisis.

The speech provoked anger and disbelief among many Zimbabweans, fuelling concerns that the 93-year-old veteran leader could face a violent backlash.

Mugabe has ruled Zimbabwe since independence from British rule in 1980. – AFP Two senior political sources said Mugabe agreed to resign on Sunday but ZANU-PF did not want him to quit in front of the military, an act that would have made its intervention look like a coup.

“It would have looked extremely bad if he had resigned in front of those generals. It would have created a huge amount of mess,” one senior source within ZANU-PF said. – Reuters

‘Unworried’ Mugabe was busy ‘munching mealies as Zimbabweans protested against him’

Zimbabwean President Robert Mugabe was reportedly not bothered by the recent demonstrations calling for him to step down.

“Relations between China and Mugabe have been quite fractious over the past year and a half, and the current situation is going to make things worse,” said Derek Matyszak, a Harare-based senior researcher at the Institute for Security Studies.

China is unhappy about Mugabe’s mismanagement of Zimbabwe’s economy and is believed to favour as his successor, Emmerson Mnangagwa, who’s seen as more of an “economic pragmatist”, Matyszak said. – AP SADC leaders set to meet in Angola over Zimbabwe crisis

The Southern African Development Community is expected to discuss Zimbabwe’s political crisis in Luanda, Angola on Tuesday, the presidency has said in a statement.

Zambian President Edgar Lungu has sent former president Kenneth Kaunda to Harare to try to convince President Robert Mugabe to step down in a “dignified exit” after the military seized power last week.

Chinese President Xi Jinping, right, shows Zimbabwe’s President Robert Mugabe the way during a welcome ceremony outside the Great Hall of the People in Beijing, China.

Under Robert Mugabe’s decades-long rule over Zimbabwe, China grew into one of its biggest investors, trading partners and diplomatic allies.

Now, as the African nation appears on the verge of its first transition of power since independence, Beijing is poised to be among the biggest winners. (Ng Han Guan, AP, File) Newspapers are held down by rocks to stop them blowing away at a news stand in Harare, Zimbabwe.

Long-time President Robert Mugabe ignored a 12:00 deadline set by the ruling party to step down or face impeachment proceedings, while Zimbabweans stunned by his lack of resignation during a national address vowed more protests to make him leave. (Ben Curtis, AP) 13:09
University of Zimbabwe students refuse to write exams until President Mugabe steps down
12:51

Robert Mugabe faced the threat of impeachment by his own party on Monday, after his shock insistence he still holds power in Zimbabwe despite a military takeover and a noon deadline to end his 37-year autocratic rule

12:45
A 12:00 deadline by the ruling party for Robert Mugabe to stand down as President of Zimbabwe or face impeachment expired on Monday with no word on the fate of the 93-year-old, who was fired as head of his ZANU-PF party at the weekend, an ignominious end to his 37 years in power. – Reuters Everyone was waiting with bated breath for Zimbabwean President Robert Mugabe to announce his resignation in a televised address to the nation on Sunday. Earlier on the day, his party, the ZANU-PF, gave the 93-year old 24 hours to resign as head of state — or face impeachment.

12:26
“There’s a lot of military about” in the streets of Harare, though the situation is peaceful, reports SAFM
12:23
“Nothing has happened” following Robert Mugabe’s 12:00 deadline to submit his resignation, reports SAFM
12:17

Mugabe, ‘leave state house’ or we go back to the streets – Zimbabwe war vets

The leader of Zimbabwe’s war veterans said they will be bringing the people back to the streets to remove President Robert Mugabe.

Mugabe’s end game: How the president could leave power

Zimbabwe’s President Robert Mugabe defied expectations by not resigning on Sunday, but support for the 93-year-old veteran leader is still crumbling.