The traditional leaders who attended the Go Register to Vote Campaign Programme facilitated by Community Tolerance Reconciliation and Development (COTRAD) urged youths from different political parties to desist from violence ahead of the 2018 elections. 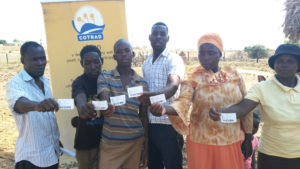 COTRAD ballot buddies with their Voter Registration slips and part of the participants following proceedings during the meeting at Four Miles in Zaka.

Speaking at the Go Register to Vote Campaign meeting  at Four Miles Business Centre on October  26 2017 Village Head, Mr Innocent Gomba of Gwara Village, under Chief Ndanga said the youths were  the bedrock of democracy -adding they constituted the largest segment of the population. He added it was therefore imperative for stakeholders, community leaders and relevant authorities to mobilize the youth to register to vote. “Young people have to know that the future belongs to them and the future is their responsibility. As community leaders we are ready to issue proof of residence documents to people who want to register to vote,” said Mr Gomba.

Other traditional leaders who also attended the meeting Mr P Zarira and Mr F Munhare of Zaka Central ward 8 proclaimed that they would not tolerate directives from some politicians to discriminate against opposition supporters in the provision of proof of residence letters. “Traditional leaders here are calling on all villagers who are eligible to vote to come and collect proof of residence letters. They also advised people to raise the red flag over any form of violation of voter registration rules by political parties in their respective areas,” said Pinias Kwaramba, COTRAD Voter Club Team leader for Zaka Central ward 8.

COTRAD will continue to engage and mobilize all eligible voters and youths to participate in democratic and electoral processes. COTRAD also calls upon the Zimbabwe Electoral Commission (ZEC) to conduct a comprehensive voter education exercise, particularly in the rural areas, mining communities and resettlement areas in the country.