The Zimbabwe Defence and Security Services have officially ended Operation Restore Legacy, which was launched on the  13th of last month. 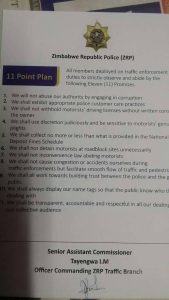 Commander Zimbabwe National Army Lieutenant General Philip Valerio Sibanda said the controversial operation has achieved its purpose to apprehend criminals around the former President Mugabe and there is now change of guard in the country’s leadership.

Lieutenant General Sibanda, who was flanked by other members of the security services, also revealed that police is back to its normal law enforcement duties since normalcy has returned to the country. A new pledge signed by the police will see radical changes in the execution of their duties a far cry from the previous road menace they had become.