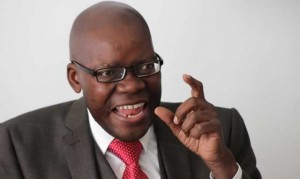 Speaking to ZimEye.com early Thursday morning, the Deputy Finance Minister Mukupe also said Biti’s position against the government, is most likely not even Tsvangirai’s view. He responded on his recent personal comment in which he says he will never forgive Biti for the former Finance Minister’s statement to the US Senate two days ago.

During the US Senate session, Biti and his compatriots alleged that Mnangagwa cannot be trusted at present because he carried out a coup.

Mukupe added saying the economy is on the positive at present and even white farmers he has just met who are exiled in Zambia have voiced their faith in President Mnangagwa.

He said he would ask Biti to do a simple thing such as to hold a rally “and have thousands of people speak and Biti rather take what they say than communicate things that do not represent the majority of Zimbabweans.”