The MDC T is a party driven by commitment and sacrifice and this is why it has remained intact despite efforts by ZANU PF to destroy it through maiming and murdering of its members, the party’s Vice President Nelson Chamisa has said. 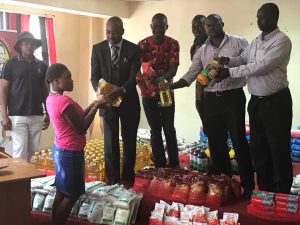 Speaking at a Christmas Goodies event organised by the youth assembly in Harare Monday, Chamisa appreciated efforts done by the youth and encouraged everyone in the party to rally behind Morgan Tsvangirai in the harmonised elections pegged for 2018.

“We have on record 66 000 members who are survivors and about 500 to a thousand heroes who have been murdered in the struggle and we are only left with seven months to complete the change.” Said Chamisa.

At least 50 families from the ten provinces of Zimbabwe received a consortium of goods which included things like flour, cooking oil, soaps and many others.

“The beneficiaries are the families of victims of ZANU PF repression, those currently incarcerated and orphans whose parents have been killed for simply calling for change in Zimbabwe.

“We started small but we are glad the initiative is growing stronger each year.” said Secretary for Health and one of the coordinators Vimbai Mavherudze.

She said the youth worked hard in scouting for donations and pledges mainly from Zimbabwe and South Africa and thanked Zimbabweans for their generosity despite a harsh economic environment.

One Baba Musarurwa a beneficiary said he was trully grateful for the youth assembly for remembering him and others and was certain the 2017 Christmas will indeed be different.