President Mnangagwa’s appeal to Zimbabweans to forgive and forget may, on the face of it, appear to be an appropriate Christmas sentiment. But in truth it is shallow and self-serving. 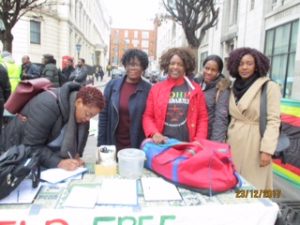 Christians are taught that forgiveness follows repentance but what we find In Zanu PF Mark II is not repentance but triumphalism and a cynical off-loading of blame and personal responsibility.

Mugabe certainly didn’t show any contrition for 37 years of misgovernment and rampant corruption when he flew to Singapore for his latest round of medical treatment at our expense. MDC MP Eddie Cross estimates that Mugabe’s rule cost 7.5 million lives (see: http://www.zimbabwesituation.com/news/the-cost-of-the-mugabe-era/).

And there has been no repentance from former Agriculture Minister Joseph Made who is under arrest after inspectors found a spectacular haul of loot on his farm – one of the biggest in Manicaland.

Made – always known to the Vigil as ‘mad Made’ – was revealed to be hoarding six state-of-the-art generators each with a capacity to light the whole of Rusape. Other loot lying idle included brand new wheelchairs still in their boxes and ten huge centre pivot irrigation systems as well as seven brand new tractors. Also found was two tonnes of expired maize seed as well as expired medicines.

Only a fraction of the farm was being used and, of course, none of the workers had been paid for the last twelve months (see: http://www.herald.co.zw/made-loots-farm-equipment-worth-millions/).

Hungry people in Zimbabwe might find it difficult to forgive Made. And we doubt they will be overjoyed by the appointment as Vice-President of the leader of the ‘not a military’ coup General Constantine Chiwenga.

We arrived outside the Embassy to find a group of Ndebele protesters, seemingly unaware that we had been protesting against Gukurahundi in that space for the past 800 weeks. Rather optimistically, they insisted on addressing the passing public in Ndebele and on playing a loud sound system although we had reached an understanding with local people ten or more years ago not to subject them to a sound barrage.

Whatever Mnangagwa might say the Ndebeles have made it clear that they have no intention of forgiving and forgetting.