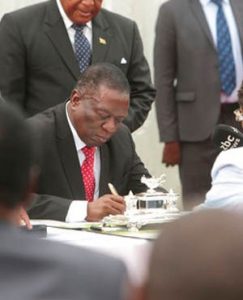 When Zanu PF were preparing for the motion to impeach Mugabe, one of the reasons they raised for the proposed action was that Mugabe had disregarded the constitutional provision to set up provincial councils. One would have expected constitutionally conscious Mnangagwa to do what his boss failed to do.

However, Mnangagwa, a lawyer by training who should have understood the constitution better than aged Mugabe, ignored this important constitutional provision to create Provincial Council, and instead, unconstitutionally appointed Resident Ministers.

In a country where we have both rural and urban councils and a Minister of Local Government who oversees these councils, what really is the purpose of burdening the taxpayer with Provincial Resident Ministers? How many body guards and secretaries, private assistants are assigned to each Resident Minister?

The constitution of Zimbabwe tells us that “the President appoints Ministers and assigns functions to them, including the administration of any Act of Parliament or of any Ministry or department”, so could Mnangagwa or his Special Advisor Mutsvangwa tell the nation which Act of Parliament, Ministry or Government Department Resident Ministers are supposed to look after? This was just the same way of giving jobs to Zanu PF boys and girls by President Mnangagwa, just as his mentor Mugabe has done in the past.

President Mnangagwa has said if the people speak, he will listen. I am speaking, and I hope others will join me in speaking, and he should fire the Resident Ministers, or else resign himself for failing to read the Constitution of Zimbabwe