Government has reversed its decision to maintain the New education Curriculum which was initiated and implemented by the former Primary and Secondary Education minister, Lazarus Dokora. 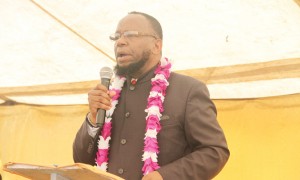 Paul Mavima, the newly appointed Minister of Primary and Secondary Education, told a local commercial and state owned radio station Capitalk FM Radio, that they were dumping the New Curriculum.

Mavima who had earlier said Dokora’s baby was there to stay, however, said the New Curriculum was going to be reviewed after listening to the concerns of parents, teachers and other stakeholders.

“The New Curriculum gets reviewed, but it stays. We have started reviewing it already and listening to concerns,” said Mavima.

The Minister admitted that there were teething problems which need to be addressed. He also said that the tasks which are assigned to students have to be reviewed to ensure that they were realistic and that they made learning fun for the students without overburdening them.

The minister also said that his ministry was working on fixing infrastructure at primary and secondary schools to ensure that rural schools, in particular, had adequate infrastructure to meet the minimum requirements.

Addressing a question from a listener on whether it was wise to implement a new curriculum without first capacitating rural schools, some of which do not have classroom blocks or furniture, Mavima said that resources will never be enough.

The minister said that if the ministry was to wait for adequate resources, nothing would ever get done.

He also said that the government was working on a proposal to ensure that the schools were going to become economic units which contribute to the national coffers. He said that this would happen if schools are able to do water retention projects which will then be used to facilitate horticulture projects