A new era has dawned in Zimbabwe… or has it? In recent weeks, to popular acclamation and adulation, ZANU PF and the war veterans have used the military to depose the erstwhile President, install Emmerson Mnangagwa in office, and to tighten their grip on power. Let there be no doubt that power is what it is all about. The triumvirate of ZANU PF, the military and the war veterans that got rid of Mugabe has a vision of a Zimbabwe ruled by ZANU PF forever. 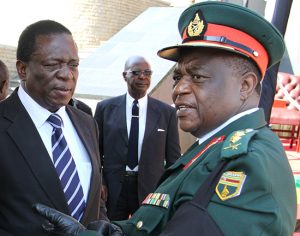 In a previous article, I discussed a strategy that ZANU PF might adopt to maintain its grip on power. I have repeated the substance of my argument here and gone on to explain how events of recent days have shown just how relevant it is.

Mugabeism is dead but ZANU PF has not passed away. Mugabe had lost the people and was leading ZANU PF to destruction. President Mnangagwa’s brief is to set the ship of state on a steady course to economic recovery and to win back popular support while ensuring the continuance of ZANU PF rule.
Zimbabwe is not a one party state and ZANU PF requires a strategy to maintain the dominance and a grip on power that it has achieved. So how might ZANU PF’s strategy to maintain power work in a democratic Zimbabwe?

A recent book by Australian political scientist John Keane, ‘When Trees Fall, Monkeys Scatter’, examines how the Chinese Communist Party continues its unbroken rule of 68 years despite numerous predictions that the system would fail. His analysis reveals eerie parallels to the Zimbabwe situation and explains how adaptability and responsiveness have replaced rigid authoritarianism to maintain the party in power. What would happen if Keane’s model were applied to government in Zimbabwe?

The key for ZANU PF would be to draw heavily on the tools of democracy. The party would use voting, elections, and opinion polls widely and constantly, employing numerous polling agencies and cutting-edge methodologies to read public opinion and mood.

Local communities would elect their own leaders. Local and regional governments would conduct votes on matters like proposed developments, parking regulations, and environmental protection laws.

Rather than keeping the lid on everything, the party would use the internet as an early warning device keeping ZANU PF leaders abreast of trends in internet chatter in real time and enabling them to prepare considered responses to fomenting issues.

The Ministry of Information, Communication, Technology and Cyber Security would become much more than the ‘Ministry for WhatsApp’ as the party monitors public opinion and the public mood by intensively surveying the internet. This will not just be censorship to crack down on organised dissent, it will be proactive by conducting wide-ranging online forums and debates, even live-streaming them.

In short, ZANU PF would use democratic methods not to grant democratic freedoms but to create a pseudo-democracy in which it would manage public grievances, respond to public concerns and pre-empt mass dissent in order to maintain its grip on power.

Responsiveness would be the key to ZANU PF’s strategy and Zimbabwe would become a “respondocracy”.

Could this really happen? Would it work in Africa? Just look next door… Botswana has been a respondocracy for 51 years and they change their leadership every ten years without fail. The opposition in Botswana is strong but not strong enough to rule because the respondocracy takes on board sound opposition policies and ideas and implements them before the next election. The end result is that opposition thinks while government implements. The BDP retains power and the ordinary Batswana are happy. Is that what we can look forward to in Zimbabwe?

That ZANU PF is bent on a similar course towards a respondocracy became clear when Patrick Chinamasa delivered his 2018 Budget on Thursday. Tendai Biti must have felt that the rug had been pulled right out from under him as Chinamasa listed the economic failings of the Mugabe regime that the opposition has relentlessly enumerated for years and, one by one, presented strategies to deal with them. At a press conference called on Friday to respond to the Budget, Biti and Nelson Chamisa were clearly floundering as they attempted to present alternatives to their own policies that Chinamasa has appropriated, and Welshman Ncube allowed himself to be side-tracked into demanding that the military return to barracks.

Tendai Biti is no fool. That he understands what is happening is clear from the final paragraphs of his statement in response to the Budget. He zeroes in on ZANU PF’s continuing determination to arrogate power to itself when he says, “It appears from the budget presented yesterday that the new authorities are intent on implementing some modicum of economic reform whilst maintaining a tight grip on power and political space.”

He also recognises the clear and present danger that ZANU PF is embarking on a Chinese model of control, “Zimbabwe is now entering a dangerous space of the reproduction of a Beijing model in respect of which political space is closed but legitimacy is bought through the bribery of some economic reforms and the capacity to make the right noises and the correct sound bites without any substantive reforms.”
That is exactly what the Chinese Communist Party is doing!

ZANU PF has long maintained a policy of “looking east” ostensibly as a measure to counter Western imposed sanctions. This policy has most noticeably increased Zimbabwe’s economic ties with China and attracted Chinese investment in construction, business, mining, and infrastructure development. However it would seem that ZANU PF has also been closely studying Chinese President Xi Jinpin’s political laboratory that is continually researching methods of government to keep the CCP in power.
ZANU PF may have ruled Zimbabwe for the past 37 years but they have forfeited any moral right to govern. Do we want our country to continue to be run by a corrupt cabal of thieves and murderers that operates with impunity and an arrogant sense of entitlement? We must continue to fight to remove this blight from our land if we truly want a free, democratic and prosperous Zimbabwe.

We must act quickly to head off a ZANU PF respondocracy by defeating them at the 2018. My fear is that, if they win the coming election, they will use the following five years to entrench an apparently democratic system of government that will use carefully managed democratic methods to effectively control the people and to maintain the party’s grip on power.

The opposition must make the most of this opportunity to act decisively by forming a united coalition to contest the election in eight months time.

The coalition must of necessity be built around the largest established opposition party. The MDC must show that it is genuinely willing to accept the collaboration of other opposition groups and broaden the appeal of the Grand Coalition by transforming the MDC Alliance into the Zimbabwean Alliance. As a matter of urgency, the disparate opposition parties must coalesce into one formidable cohesive force that will inspire Zimbabweans to register and vote in unprecedented numbers to take back control of their country.

There is not a moment to be lost!

Tapson Muchena is an academic and a keen observer of the Zimbabwe situation. He can no longer remain silent.
Email: [email protected] Twitter: @TapsonMuchena