While ladies of the night put on the right makeup, lashes, musk and dresses to entice clients, their counterparts in the political arena use words, and exaggerated loyalty to charm the mighty and powerful. 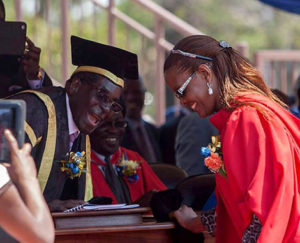 It sounds like fiction that at her peak, former first lady Grace Mugabe’s face was emblazoned on cars of adoring Zanu PF faithful and her word was almost the law.

Grace and her husband, former president Robert Mugabe attracted thousands to their rallies but now many, including those who once sang their praises, have like political turncoats abandoned them.

But crossing floors and denying allegiances did not start with the fall of Grace and her husband, it is as old as prostitution and in Zimbabwe the once runaway winner was former Higher and Tertiary Education minister Jonathan Moyo.

“It has been said that politics is the second oldest profession. I have learned that it bears a striking resemblance to the first,” former United States president Ronald Reagan once said in the 1980s.

And in Zimbabwe there is little difference between the two “professions”

The fights in Zanu PF are as old as the political party itself formed in 1963 after splitting from Zapu.

Fast forward to 2014 when former vice president Joice Mujuru was pushed out from Zanu PF while some cheered, hundreds, tails between their legs left the ruling party crestfallen but determined never to rejoin the former revolutionary party.

Thousands of former Zanu PF officials peeved by Mujuru’s ouster, including some who even once vowed never to rejoin the party like Kudakwashe Bhasikiti, are knocking on the ruling party’s door, pleading for readmission.

The likes of Bhasikiti called Zanu PF by all sorts of names but today they are ready to go back to the ruling party and perhaps salvage a parliamentary seat, because the outside was never rosy.

“If young politicians flip flop, take people’s trust and money for granted, then Zimbabwe’s future isn’t safe. Let’s do better. Principle is king,” she wrote on her Facebook page.

The culture of political flip-flopping has become engrained within the ruling party and extends beyond the party as those that had joined the opposition are also making a beeline back to the ruling party.

The party later split, which resulted in Mujuru forming another party called the National People’s Party (NPP), while Bhasikiti remained with ZPF.

Bhasikiti recently wrote a letter to Zanu PF seeking to be re-admitted to the party.

He is not the only one of those people that purportedly left Zanu PF, who are now jostling to return to the party that has been in power for the past 37 years.

There is also Acie Lumumba, who left the party and formed his own Viva Zimbabwe in June 2016.

Two years down the line, the political leadership in Zanu PF has changed and he announced that he is back to the ruling party.

“The reasons for my resignation on May 29, 2016, no longer apply: the party has forcefully and credibly begun the process of reforming itself and the ruling party is now in the unique position to drive positive change in Zimbabwe, as enunciated by its new leader,” Lumumba said in his statement announcing his return to Zanu PF.

Zanu PF representative in the United Kingdom, Nick Mangwana, however, on Twitter said the flip flopping of the party members is proof that power rested in the leadership as opposed to the people.

“Zimbabwe needs to reform but it cannot reform unless Zanu PF reforms first. The flip flopping of its members & supporters was evidence that power did not rest in the people but leadership which used largesse and patronage to paralyse & control membership. That has to change,” Mangwana said.

Like Lumumba, another Zanu PF youth leader, who had officially broken ties with the ruling party and joined the Zimbabwe Partnership for Prosperity (Zipp) is Godfrey Tsenengamu.

Tsenengamu recently quit Zipp and went back to the ruling party.

“I want to take this opportunity to thank the Zipp leadership as led by (Dr) Blessing Kasiyamhuru for the honour that it had bestowed on me to serve the partnership in various capacities. I am grateful.”

Another member to follow in his footsteps is former Zanu PF youth leader Jim Kunaka, who had joined Mujuru’s political outfit.